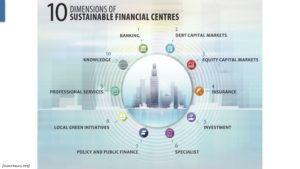 For many, modern finance is becoming an increasingly disembodied arena dominated by algorithms and electronic trading. But the reality is that place still matters profoundly. The world’s more-than-100 financial centres stretch from the massive to the minuscule, but all are testimony to the importance of people coming together to allocate funds, analyse risks, seek out opportunities and do deals. These centres jealously guard their rankings, seeking to attract both clients and talent, across the spectrum of banking, capital markets, investment, insurance and, increasingly, fintech too.

Now sustainability is entering the mix as a new driver influencing the positioning of these financial centres. Once again, it was the Paris Agreement that provided the stimulus – signalling that climate had become a strategic factor for finance, one that financial centres could no longer ignore. Just a few weeks after the historic deal with struck, the venerable City of London Corporation, the body that governs the Square Mile and promotes the UK’s financial sector, launched its Green Finance Initiative. London clearly had a lot going for it, but it had hitherto lacked a plan that could harness these attributes. The prospect of China’s burgeoning green finance market also offered the prospect of new growth opportunities.

Yet London was not alone – and Paris Europlace quickly launched its own programme a few months later in 2016. This brought together a different mix of factors, not least the market-shaping regulations contained in France’s Energy Transition Law and the anchor role played by its public pension funds. Both Paris and the surrounding Ile-de-France region have also issued green bonds, demonstrating a powerful dynamic between local environmental ambition and financial practice. A few weeks ago, the initiative was rebranded as Finance for Tomorrow, its logo a tree nestling beneath the Arc de Triomphe.

In May, Frankfurt joined the pack, with Deutsche Boerse kicking off its own Sustainable Finance Initiative. Luxembourg has also set up a Climate Finance Task Force, while Casablanca in Morocco is positioning itself as the African hub for financing climate action. Hong Kong’s Financial Services Development Council has called for the city to become a regional green finance hub, arguing “if it does not seize this opportunity, others will do so”. And in Stockholm, the first city-based green fintech initiative is now off the ground.
These are all welcome moves. The hard question is whether they add value to existing efforts to mobilise the financial system not just for the climate, but for sustainable development more broadly. To explore the potential, Italy hosted a first meeting of leading financial centres as part of its 2017 G7 Environment Programme. This found that many different ingredients can come together to build a financial centre that speeds the sustainability transition: to find out more, read the Inquiry’s latest report here.

Italy’s own financial centre, Milan, has a focus on serving the country’s small- and medium-sized enterprise sector (for example, through the mini-bond market). In the US, there are multiple financial centres, from New York with its preeminent capital markets to San Francisco with its world-beating tech finance ecosystem.In both, real potential exists for new alliances to be made with city- and state-level plans for climate action, whether through local green bond issuance, state green banks or energy retrofit programmes. North of the border in Canada, Toronto is home to the largest number of cleantech listings in the world, with action at the provincial level by the Ontario government to boost green finance (including through its emergent carbon markets). In Japan, Tokyo’s metropolitan government has established a ‘Global Financial City’ initiative with the goal of revitalizing its financial sector; it is also committed to issuing its own green bonds.
What this initial experience shows is that financial centres can make a real difference by grounding green finance, generating a cluster effect as sustainability takes hold across financial sectors and institutions. Although stock exchange efforts and green bond issuance have certainly catalysed financial-centre thinking, there is a is growing recognition that this is a multi-asset opportunity. Indeed, financial centres could be a much-needed player helping to build the pipeline of green assets – not least from within the cities in which they sit, channelling capital for green buildings, mass transit systems, clean energy, resilient waste and water infrastructure and sustainable urban agriculture. Financial centre initiatives can also act as focused interlocutors with national governments on the design of policies that will really move capital.
The greening of financial centres is, however, at a very embryonic stage of development. Most financial centres have yet to consider how sustainability influences their future trajectory and even for those that have launched initiatives, activities are still exploratory. Policymakers can help by prompting more centres to take action. This is what G7 Environment Ministers did when they met in Bologna last month. In a joint communique agreed by all G7 members (including the US), the ministers recognised that “scaling up sustainable finance is fundamental to achieve sustainability and climate goals” and highlighted the potential for financial centre initiatives to be furthered through international cooperation.

Clearly, financial centres compete, but they also need to work together to support stable and open markets – and this applies to the sustainability agenda as well. It’s striking that the financial centres working on green and sustainable finance have all shown a real willingness to share learning, ideas and expertise. A network of financial centres working on sustainability is now being formed to help make this happen. Alongside this, a benchmark is being designed by I4CE and the EU’s Climate-KIC to assess the contribution that different centres are making to sustainable development.

Ultimately, sustainability offers the world’s financial centres a new sense of purpose – and gives them a renewed impetus to serve the real economy, provide an environment within which financial institutions can thrive and professionals can lead fulfilling careers.

Nick Robins, is co-director of the UN Environment’s Inquiry into a Sustainable Financial System.