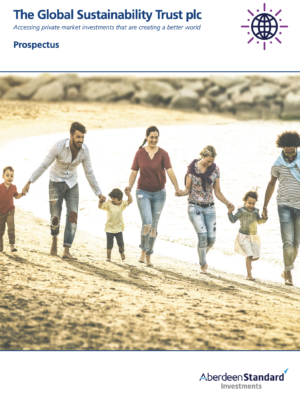 Aberdeen Standard Investments has delayed the launch of the Global Sustainability Trust for the second time, becoming the latest in a string of high profile offerings with sustainability credentials that have failed to meet expectations.

In late 2017, the People’s Trust spearheaded by Daniel Godfrey, former chief executive of the UK’s Investment Association, failed to IPO. It was marketed as a long-term, sustainable investment product that would operate without an index benchmark.

And the Impact Investment Trust, supported by the Swiss and British governments and managed by Swiss-based Obviam, failed to raise enough to float on the London Stock Exchange.

Now, the Global Sustainability Trust (GST) – focused on private market impact investments and managed by Aberdeen Standard Investments – is the latest to fail to raise its target of £200m after previously delaying its launch in December.

It comes as the Investment Association is looking to develop a sustainable fund product label.

In a statement to RI, Andrew Dykes, founder of the GST initiative and co-founder of Jura Capital, said:

“Whilst market and political uncertainty were not in our favour, the strength of support, particularly from specialist and regional wealth managers, was very encouraging.

“A problem for smaller investment trust fund launches is that they are often too small in size for the larger fund buyers, regardless of whether it is an impact-focused investment trust or not.
“But as the opportunity to help democratise, mainstream and scale impact investing via the investment trust structure is attracting the growing support and attention of many impact investors, charitable foundations and other civil-society actors, I am confident that impact investment trusts will come to be accepted as a mainstream solution.”Daniel Godfrey blamed similar reasons for the failure of the People’s Trust, telling Wealth Manager that while it had strong retail investor support, it failed to attract investment from asset owners.

“The strength of support was very encouraging.”

The GST board will consult with interested investors and its advisors before considering a new launch later this year, when market conditions have improved.

It comes as other new sustainable products with high-profile backers and media fanfare have not met expectations.

A new ESG-focused investment trust, launched last year by veteran investor Mark Mobius to wide fanfare, did manage to IPO, but just raised half the amount it hoped at launch – £100m instead of £200m.

And the ‘Girl Fund’ launched by investment grandee Helena Morrissey, has been snubbed by investors, according to press reports.

The Legal & General fund, which was widely reported on at launch, includes FTSE companies with good gender diversity scores. But, it has amassed just £1.6m of investor inflows from May to the end of November 2018, according to data from Morningstar.