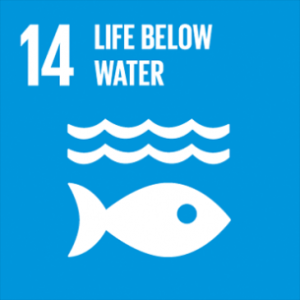 Last Saturday, viewers in America were treated to the final episode of the BBC’s awe inspiring Blue Planet II. Like us in the UK some four month earlier, they were probably left distressed by the horrific images of plastic waste and pollution choking our oceans. Narrator, Sir David Attenborough was resolute in his message. The very future of our oceans and indeed that of life on earth, now depends on us. The likes of Blue Planet II and the tireless work of conservation organisations globally has placed ocean health squarely in the public eye. Thanks to the Sustainable Development Goals, ocean health is also now of political importance. The targets of SDG14 – ‘To conserve and sustainably use oceans, seas and marine resources’ range from reducing marine pollution and protecting coastal ecosystems to ending illegal fishing and addressing the impacts of climate change on the oceans. These are cross-cutting issues that underpin far more than a conservation agenda. The UN estimate that a healthy ocean supporting fisheries and aquaculture, energy production, trade and tourism contributes around US$ 3 trillion to the global market economy annually, making it roughly the same size as the UK economy.
Worryingly though, we are damaging the ocean at an alarming rate. In economics terms, overfishing, coastal hypoxia, harm from invasive species and habitat loss is estimated to cost between $350bn and $940bn annually. And on some fronts the situation is worsening: at the start of this year it was widely reported that fossil fuel companies invested some $180bn since 2010 into cracking facilities globally with the aim of increasing plastic production by around 40% over the next decade.
In the face of such strong headwinds, meeting SDG 14 requires a major re-think. From an investment perspective, the challenge is significant. Protecting between 5-10 % of ocean area alone is estimated to require at least a US$28 billion one-time public investment and about $21 billion a year thereafter. The price tag of avoiding continued oceanacidification, which is near wholly dependent on cogent climate action is likely to run into the trillions. Never has there been a greater need for more environmentally responsible investment. However, for investors wanting to support life below the waves, taking action can seem both ambiguous and risky. The ‘blue economy’ as many now term sustainable ocean investment, is broad and encompasses opportunities that range from coastal infrastructure development to sustainable fishing, through to waste collection and recycling. Viewed through the lens of SDG 14 these sectors are complimentary and inter-related. From the perspective of an investor, they are quite different business models. Aquaculture and sustainable fishing can be placed into agriculture allocations but where does plastics sit and what about financing marine protected areas? Are they climate finance or environmental investment? Few institutional investors have an ‘Ocean finance’ division or are well set up to finance SDG 14.
It is not just allocation that is a challenge. A new sector brings other difficulties. Historically, investors have complained of limited investment-ready opportunities and few credible investment case studies to point to. Ocean industries and in particular aquaculture have been seen as the ‘wild west’ with little regulation and few formal and reputable market structures to provide investor comfort. Deals can be perceived as difficult and risky with many operational and governance challenges to overcome, and issues such as leakage and enforcement are particularly acute in developing country contexts.
Encouragingly though, a number of innovators are starting to re-draw the map for investing into SDG 14. They span new businesses seeking to make SDG 14 more ‘bankable,’ through to dedicated investment funds increase capital supply. Increasingly investors are sensing the opportunity of investing in the Ocean but they are also innovating to make it happen.
On February 22nd, the Seychelles announced it is to
create two huge new marine parks, exceeding 200,000 km2 in return for US$22m of its national debt being written off in a deal led by The Nature Conservancy and involving government and private investors. A similar deal is expected in Grenada later this year. A day later in the Caribbean, the project developer Blue Finance announced the signing of a Public Private Partnership (PPP) agreement for the co-management of the second largest Protected Area of the Dominican Republic. This project, the first in a suite of similar models from the developer, represents one of the largest PPP agreements for marine conservation globally and is based around incomes generated from tourists through user fees and eco- tourism models. There are also other, more accessible, opportunities for responsible investors. Vehicles like Althelia’ s Sustainable Ocean Fund, which has a downside guarantee from the US Government, are set to launch and provide access to a blended portfolio of ocean projects, ranging from sustainable fishing to plastics waste management, whilst offering an attractive financial return. Similarly, US-based Closed Loop Partners has teamed up with Ocean Conservancy and a range of consumer goods companies to fund waste infrastructure solutions in Southeast Asia, where it is estimated over 60% of ocean borne plastic currently originates from.For investors who are interested in SDG 14 but are unsure how to go about it, there has also been a recent wave of ‘Principles’ intended to help navigate the space. The Climate Bonds initiative have published their Marine Renewable Energy Criteria and are in the process of drafting similar on fisheries. Earlier this month the European Commission and WWF released their Blue Economy Finance Principles, through which voluntary adopters commit to responsible and sustainable action. Perhaps more practically, a group of pioneering impact investors and international NGOs have collaborated on principles for investment in wild caught fisheries, which are principles in name but also provide practical guidance and concrete implantation examples to help investors. Many of the same actors are also involved in publishing investment blueprints as part of the Coalition for Private Investment into Conservation which are set publication for later this year.
So will 2018, the International Year of the Coral Reef, be the year that ocean finance hits the mainstream? The early signs are certainly promising.

David Barley is Investment Director at Mirova-Althelia and is co-leading the launch of the Althelia Sustainable Ocean Fund.