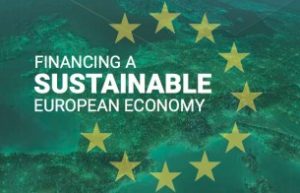 The High Level Expert Group on Sustainable Finance (HLEG) represents the first time Europe’s regulators and policymakers have ever seriously tried to get to grips with responsible investing.

There have already been nods in that direction from time to time: the 2016 IORP II pension fund directive includes guidance on risk assessments “related to climate change, use of resources, the environment, social risk and risks related to the depreciation of assets due to regulatory change (‘stranded assets’)”; the non-financial reporting directive requires ESG disclosure to varying extents across member states; and legislation has been passed for structures such as European Social Entrepreneurship Funds (EUSEFs) and Long-term Investment Funds (ELTIFs), to try and scale up sustainable investment. But the efforts have been disparate and often not very effective (the fund structures have seen very little traction, for example).

This time, a joined-up, market-led approach has been adopted, driven by a group of 20 representatives from pension funds, asset managers, insurers, NGOs, banking bodies and other arenas. After just six months, HLEG has identified an array of topics that need to be addressed and even whittled some down into early recommendations link. Unusually, these recommendations – and the broader interim report – have been put out to public consultation to garner feedback from the wider market.The daily coverage RI will give to HLEG over coming weeks aims to explore some of the areas up for debate during that public consultation – both the topics that are highlighted in the report and, just as importantly, those that are currently missing.

Until the consultation closes on September 20th, members of HLEG will discuss the topics closest to their hearts, and shed more light on the views held by different individuals within the group. RI will also look into some key topics, such as the potential for regulatory change around credit ratings, how HLEG can address carbon markets, and the future for sustainability taxonomies.

HLEG has a matter of months to come up with its final recommendations, which it is expected to present to the European Commission at the end of the year. Its journey so far has not been without its hurdles: it has garnered criticism from some regarding its governance structure, its lack of diversity and the ‘cosmetic’ nature of some of its early recommendations. However, as one climate finance specialist, who applied unsuccessfully to become a member of HLEG, told RI: “The mere existence of this group is positive. We shouldn’t turn a blind eye to its short-comings, but we shouldn’t let the nitty-gritty spoil the fact that seven years ago we were talking to 10 people – and three of those wouldn’t show up – and now we have this. It’s fantastic.”

To participate in the public consultation, see here.