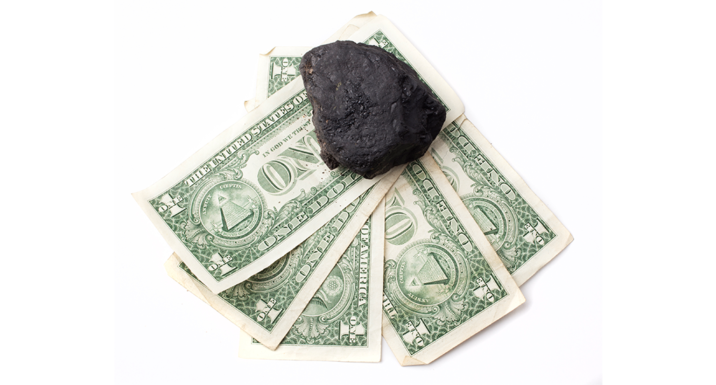 In a recent article in Responsible Investor Steve Waygood, Chief Responsible Investment Officer at Aviva Investments and a leading authority on the role of financial institutions in climate change, has recently argued that a price on carbon, not ESG ratings, is the most effective way to change the behavior of companies. The government solution is a tax on carbon.

A market solution is an emissions trading system (ETS), which requires firms to buy and sell carbon “allowances” or “credits.” Whichever solution is chosen the price has to be sufficiently high. A Goldman Sachs analysis estimates that a price of more than $100 per ton is needed to reduce global emissions by 50% with current technologies.

Building on our prior work, we decided to explore the financial implications of a carbon tax on a large set of U.S. companies. The results are sobering, although not surprising. Companies in most industries will experience significant reductions in profitability without making dramatic changes in how they run their business. This is especially true for companies in high-emitting industries. Nearly one-quarter of the companies in our sample would suffer a 50% drop in earnings. Nearly 60% of utility companies will lose all or more of their net income.

The obvious question this raises is whether a carbon tax would be a powerful incentive to change company behavior or whether it would have such a deleterious effect on companies’ financial results that few governments would be willing to impose it. There is no easy answer to this question. Our goal is to inform the discussion by providing some insight into the extent of the financial impact of a carbon tax at $50, $100, and $150 per ton of CO2 equivalents. (To the extent we were able to ascertain this from reported company disclosures.)

Using the emissions data provided by Trucost (which does CO2 equivalents), we stress test U.S. companies’ average earnings (from COMPUSTAT) at a $100 carbon tax for the last three years (2017 – 2019). Trucost obtains carbon emissions data from various public sources, such as company financial reports, environmental data, and data published on company websites or other public sources. If a company does not disclose emissions data voluntarily, Trucost exploits an environmentally extended input-output model to estimate the impacts for a company’s own operations and across its global supply chain. Our final dataset includes 3,005 U.S. companies corresponding to 7,814 firm-year observations. If 2019 emissions data is not available, we calculate the average emissions of 2017 – 2018.

Precision of our analysis is limited for two reasons. First, the carbon emissions data provided by Trucost are heavily based on estimated numbers. A remarkable 78% of our sample companies do not voluntarily disclose their emissions data. This is clearly a strong argument for the government to mandate the reporting of carbon emissions.

Second, for companies that self-disclose emissions data, problems with comparability, consistency, and verifiability problems pose obvious analytical problems. Self-reported numbers usually follow divergent methods and criteria, and the reporting of scope 3 emissions is always a challenge with regard to multiple categories. The potential misreporting incentives may also lead to understated emissions.

The Degree of Financial Impact by Carbon Tax Price

With a $100 per ton carbon tax, it turns out that pricing in carbon will have significant financial effects on U.S. companies if the cost is not passed on to consumers. 864 of our companies in our sample (28.8%) report negative average earnings and these companies would obviously suffer if carbon tax were imposed. Of the companies that report a profit, a carbon tax on scope 1 and 2 emissions would wipe out the earnings of 142 companies (6.6%). If scope 3 is considered, the earnings of 311 companies (14.5%) would be totally wiped out. Around 1275 companies (59.6%) of the profitable ones would suffer at least 10% fall in net income, and 562 companies (26.3%) would suffer at least a 50% fall.

The Degree of Financial Impact by Industry

To take a closer look at the impact of a $100 per ton carbon tax on U.S. companies, we conducted a rough stress test by industry (Table 3). Among the GICS Industry Groups, the top five most affected industries are Utilities (the earnings of 58.5% of utilities companies would be totally wiped out), Materials (54.5%), Food, Beverage & Tobacco (46.2%), Food & Staples Retailing (45.0%), and Automobiles & Components (42.9%). The top five least affected industries are Banks, Insurance, Semiconductors & Semiconductor Equipment, Diversified Financials, and Software & Services. Almost no companies in these industries would lose their entire earnings. In particular, only one of the 291 (0.3%) profitable banks would lose even 10% of its earnings when a $100 per ton carbon tax was imposed. Insurance and diversified financials are also among the least affected ones at the 10%/20% threshold. For other industries, most companies would inevitably suffer at least a 10% to 20% fall in their earnings.

The last column in Table 3 shows that self-disclosure is highest in industries that would be most affected by a carbon tax. This is not surprising since high-emitting industries are under the most severe pressure from investors to disclose their carbon emissions. But this does raise the question of whether companies in these industries are starting to factor in a carbon tax on their business models and capital allocation decisions. There is a simple five-step process for them, and companies in any industry, to do so.

The Special Case of Banks

It is also not surprising that most financial institutions would not be affected by a carbon tax because their operations, products, and services produce very little carbon emissions. Banks stand out as the industry with the lowest amount of self-disclosure (4.1%). However, to the extent climate change hinders the performance of the companies they finance or insure, this will inevitably lead to losses.

Of greater significance is the role financial institutions, including banks, play in “financed emissions.” According to a research report by CDP, the greenhouse gas (GHG) emissions associated with financial institutions’ investing, lending and underwriting activities are more than 700 times higher, on average, than their direct emissions – and the risks of inaction are huge. CDP notes that only 25% of the 322 financial institutions that accepted their survey have reported financed emissions, and among those that did, most reported on less than 50% of their portfolios, thereby obscuring the true impact of their financing activities. The Partnership for Carbon Accounting Financials (PCAF) is addressing this issue.

The accuracy of reporting according to PCAF is a function of data availability. PCAF notes that “limited data is often the main challenge in calculating financed emissions; however, data limitations should not deter financial institutions from starting their GHG accounting journeys. Beginning with estimated or proxy data can help identify carbon-intensive hotspots in lending and investment portfolios.” More accurate company reporting will enable more accurate reporting of financial institutions of their financed emissions.

This still begs the question of the efficacy of a carbon tax. Standards for reporting on carbon will help ensure reliability and comparability. They will enable financial institutions to assess the impact of a carbon tax more accurately on each portfolio company. How great that impact is will depend on the extent to which management takes carbon emissions seriously in its business model, strategy, and capital allocation decisions.

Robert Eccles is a Visiting Professor of Management Practice at the Said Business School, Oxford University

Xingchao Gao is an MS candidate at Columbia Business School