Responsible Investor
Home Hot Topics How easy will it be for UK savers to “Make My Money...
Return to search
Institutions 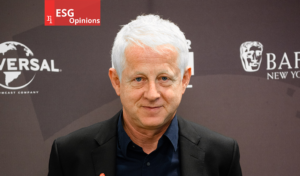 British screenwriter Richard Curtis creates success. Four Weddings and a Funeral, an unexpected hit in the 90s, was made in six weeks for just £3m, but generated £245.7m at the worldwide box office, and competed at the Oscars with blockbusters Pulp Fiction and Forrest Gump.

Curtis wants to replicate this magic touch with a new campaign aimed at the UK pensions industry: “Make My Money Matter”. As well as being renowned in film, Curtis is a well-known campaigner, leading initiatives such as Make Poverty History and Live 8 to challenge governments on social issues. Now he is turning his attention to finance, pushing to start a conversation on where pensions in the UK are invested in the hope it will prompt individuals to pressure their pension providers to move £3trn into investments for people and planet; rather than things that are destructive to both.

It launched virtually yesterday with a superstar cast, including Mark Carney, HSBC’s Russell Picot and Tanya Steele, CEO of WWF.

“Moving your savings to sustainable funds can be 27 times as effective at reducing your carbon footprint than giving up flying or giving up meat”.

To regular readers of Responsible Investor, this quote may sound familiar. Last year asset manager Nordea came under fire after using this exact same statistic to promote its sustainable products.

Magnus Vie Sundal, former Credit Strategist at DNB Markets, described the methodology for calculating climate savings as “weak”. Martin Schmaltz, a Professor of Economics and Finance at Oxford University, said that one key “problem with your methodology is to simply assume that carbon emissions are saved by investors shifting savings to green funds”.

On social media this week, there are queries about Make My Money Matter’s “27 times” claim too. People are being directed to Nordea’s website for validation.

But, despite some arguably unsubstantiated claims, the campaign is obviously compelling: people power forcing finance to change for the better and save the world. Speakers at the launch cited surveys finding that if given the option, people will invest their pension with their values.

But does this translate in the real world? It is common knowledge now that pollsters can underestimate support for political candidates in their assessments, as people behave differently in the privacy of the ballot box than when asked in public.

When the Universities Superannuation Scheme, the UK’s fund for academics, launched an ethical option after pressure from members, less than 5% of its assets went into it.

CalSavers, the pioneering new auto-enrolment workplace pension scheme in California, reluctantly launched an ESG option after political pressure; but warned it wouldn’t get traction. Just eight out of the 4,050 members had selected the ESG option at the end of 2019.

Scheme members mostly stick to the default pension, even with marketing of other options. Helen Dean, CEO of Nest, the UK’s £10bn workplace pension scheme and a Make My Money Matter supporter, made the important point yesterday that the key was to making the default option “responsible”.

“Our members are interested and want to know how money is invested and calling on us as a pension provider to be responsible in wake of Covid-19,” she added.

It sounds like a simple request, to ask your pension fund how they invest your money. But, a few years ago, UK parliamentarians wanted more transparency on the holdings of their pension fund to understand its exposure to fossil fuels.

It took the MPs, led by the Green Party’s Caroline Lucas, months of wrangling to just get this information from the pension fund trustees – and these are some of the most powerful people in the country.

I remember a public meeting facilitated by an NGO between one of the UK’s top pension plans and their members to discuss responsible investment. The members asked thoughtful questions on the risks of stranded assets, and investment opportunities as a result of the low-carbon transition.

The pension fund executives did little to hide their disdain, despite politely answering all questions. They clearly didn’t want to listen to their own members, whose money they invest.

But these are isolated cases, and the world is changing – transparency and accountability are at the top of every industry’s mind with current events.

As an experiment, I tried to see how quickly I could decipher where my own pension was invested. My provider is a household name in the UK and I very easily managed to access my pension account online, even though I had forgotten my old password.

It took some effort but I eventually found a factsheet listing just the top ten holdings in my pension fund. An online customer service assistant responded quickly to my request to see all the companies in my pension fund, directing me back to the factsheet. I tried to explain this didn’t tell me where all my pension was invested, but despite being very attentive, the assistant couldn’t get me the information, and didn’t really understand my request.

Lots of people on social media are now asking their pension plan the same questions as me, including UK household names such as footballer Gary Lineker and campaigner Sarah Brown.

The Netherlands pension industry became leaders in responsible investment after a scandal involving investments in cluster bombs ignited public awareness and pressure. In Norway, its people forced the government to create the Council of Ethics to guide the investments of its giant oil fund.

It would be interesting to know if all the big players supporting the Make My Money Matter campaign – NEST, HSBC, Triodos, BNP Paribas, the Environment Agency Pension Fund – are going to proactively tell their members all the companies their pension is invested in. The Big Exchange, a new online retail investment platform for sustainable funds in development and a supporter of the campaign, wants to do this for users.

At the launch yesterday, journalists asked how Make My Money Matter will be different from past initiatives where the pension industry has tried to raise awareness with the public unsuccessfully; and whether with the current financial pressure and worries about the future because of Covid-19, it’s the right time for a campaign on sustainable pensions. “People will be desperate to preserve money,” said one journalist.

But, Anne Marie Vestraeten, UK country head at BNP Paribas, perhaps had the most focused answer, that could work well for the campaign: “Very simply, what’s the point of having a pension if there isn’t going to be a world that is worth living in?”