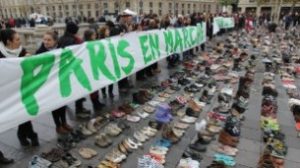 All eyes are on Paris this week as the governments of more than 190 countries gather in Paris for COP21, or to give its official title – the United Nations Framework Convention on Climate Change, 21st Conference of the Parties – that will set the environmental policy agenda for the decade 2020-2030, and beyond.
The broad aim is, of course, to reach an agreement to reduce global greenhouse gas (GHG) emissions and avoid the threat of dangerous climate change. But an overview of the purpose, fine print and potential outcome of the conference is key; notably for investors. The context of COP21 is that current governmental commitments on GHG emissions end in 2020. In Paris, the ‘plan’ is for governments to produce an agreement on the decade 2020-2030. The science has been repeated ad-nauseum, but is worth re-iterating. The Intergovernmental Panel on Climate Change (IPCC), the international body for the assessment of climate change, comprising the pre-eminent climatologists and scientific advisors from 195 countries, says if GHG levels continue to rise and pass the estimated threshold of a temperature rise of 2C above pre-industrial levels, we enter the territory of dangerous, unavoidable and multi-faceted impacts from climate change. On current emissions trajectories we are heading for a rise of about 5C.
Broadly speaking, what’s on the table at COP21, as outlined in October’s quixotically-named: ‘Ad Hoc Working Group on the Durban Platform for Enhanced Action (ADP)’ held in Bonn, Germany, is ratification of country–specific and global mitigation, adaptation and financing plans. These sit alongside agreements on technology transfer, transparency, capacity building and stocktaking of results.
On mitigation and adaptation, 156 countries – responsible for about two-thirds of global emissions – have come up with GHG emissionsreduction targets, known as Intended Nationally Determined Contributions (INDCs) that had already been called for. On present commitments, the EU says that by 2030 it will cut its emissions by 40% compared with 1990 levels. The US says it will cut emissions by 26% to 28%, compared with 2005 levels, by 2025. China says its emissions will peak by 2030. The purpose of the INDCs is to hold the global average temperature rise below the 2-degree threshold, although their firmness is questioned. Observers believe the likely emissions reduction responses so far would mean a rise of circa 3-3.5 degrees. In principle, the INDCs are to be quantifiable, unconditional (at least in part), and the data/information underpinning them is to be shared. Each nation should review its mitigation policy every 5 years. These nation-level adaptations should be co-ordinated internationally, with special support for low development countries (LDCs) and small island developing states (SIDS). Global financing for mitigation and adaptation, could, as ever, be a stumbling block in the talks, particularly the proposal that developed countries further support developing nations by scaling up the $100bn per year by 2020 already committed. Indeed, there are question marks about the extent to which the original money has been mobilised to date. The World Bank says there is a gap of $70bn in existing promises. Closing that gap, and prolonging the flow of capital – to clearly economical ends – is critical to building the trust necessary to reach a robust deal in Paris. The parties to COP21 provisionally agreed in Bonn to prioritise grant-based and concessional finance to the poorest/most vulnerable countries and factor climate change resilience into international development assistance. Importantly, they put forward a proposal to reduce international support for high-emissions and so-called ‘maladaptive investments’. There is, as of yet, however, no commitment to a global price on carbon.