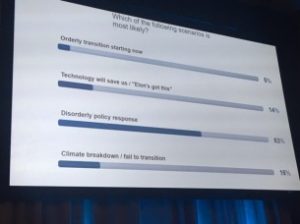 Last week’s PRI in Person in San Francisco – the biggest yet with some 1200 people through the door – was a reminder of how far responsible investment has come, and still has to go. We have arrived at the stage of ‘consciousness’ with more people acknowledging and talking about sustainable finance. We must now quickly bring that to clarity of purpose, action and investable outcomes if it is to deliver. A good example of what I mean was delivered by the delegates themselves. In a vox pop survey of the audience by Nathan Fabian, Director of the PRI’s Policy and Research, during a panel titled: “Responsible investment in an age of political divergence: how policymakers in Europe, Asia and the Americas are responding,” the audience was asked which of the following scenarios was most likely for the response to climate change:
A. Orderly transition starting now.
B. Technology will save us.
C. Disorderly policy response.
D. Climate breakdown/fail to transition.
Almost four fifths of respondents (79%) voted for the last two, albeit split clearly between 63% seeing a disorderly transition, and 16% predicting climate breakdown. More attendees at PRI in Person predict a failure to transitionover the potential for technology riding to the rescue (14%) or an orderly transition starting now (just 5%). That is desperately worrying; a disorderly policy response on climate will not come close to solving the problem. Investors have a clear fiduciary role to aggressively lobby for ‘orderly’ regulatory frameworks for action. To this end, RI published a challenging reality check on where we are at with the response to climate change last week.
Encouragingly, there are positive signs of serious regulatory and incentive/investment-based responses to climate change. California, the world’s fifth largest economy, is leading the way.

Indeed, US states are massively stepping up their game, tying sustainable finance into their push-back against Trump’s pull-out from the Paris Agreement: see our recent stories on New York, Chicago and Oregon.
In other progressive policy news, the Green Bond Pledge signed by the likes of the City of Mexico, and the state treasurers of California, New Mexico and Rhode Island and cities including San Francisco, which hopes to contribute to US$1 trillion-worth of green bonds issued by end 2020, is essential because it’s new money hypothecated to low carbon infra. This is where the
green bond market must be if it is to deliver real additional CO2 reductions. Likewise, the EU needs to get its incentive story straight in its Action Plan on Sustainable Finance, broadly incorporated in the proposed Green Supporting Factor, which proposes that existing capital requirements for banks be relaxed in order to promote climate friendly investments in areas like green infrastructure. It has come under fire from national supervisors and member states who fear a dismantling of credit controls put in place after the financial crisis, which is a fair call.
Martin Spolc, Head of Unit, Capital Markets Union, DG Financial Stability, Financial Services and Capital Markets Union at the European Commission (EC), told PRI in Person that the EC’s Vice-President Valdis Dombrovskis has stated that financial stability will never be compromised and would be paramount in any final proposals. Spolc said the Commission was still working on potential solutions to the Green Supporting Factor proposal with the French and Dutch central banks. These need to arrive quickly and potently if the Action Plan is to be rescued from being an overly bureaucratic initiative.
On the same panel, Robert Li, Senior Vice President & Investment Strategist, International Business at China Asset Management Company, one of the country’sbiggest fund managers, said China’s ecological and environmental reform programme started in 2016 was being developed at a level of “national strategic importance.” He said the framework document for the reforms focused on developing a green credit system, promotion of green investment and insurance products, and new laws on environmental protection, clean air and alleviating water stress. Pilot programmes, he said, were now being developed and engagement is taking place with public companies for feedback. The reforms are scheduled for full implementation in 2020.
In the grand scheme, however, these developments – while positive – fall far short of the ‘shifting trillions’ we know is needed.
As Fiona Reynolds, the PRI’s CEO, pointed out: “The world is not moving at the speed, pace and urgency that’s required. Either we will have Paris agreement aligned investments, or there will be a late attempt to right this. A policy response is going to be required.”
She’s right. We need to get serious up-front about what those policy responses should be and how investors can clearly support them. The PRI membership must lead here. Alongside real, measurable work on climate data and comparison, CO2 reduction engagement results (in line with Paris) and lobbying against fossil fuel incentives, it needs to tell policymakers what policies it will back and how. And now. Time is running out.