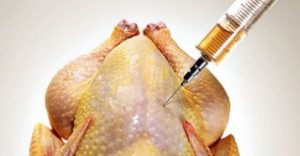 The overuse of antibiotics in the meat industry has been directly linked to the rise of antibiotic-resistant “superbugs” in the U.S. and across the world. According to the Centers for Disease Control, antibiotic resistance is responsible for 2 million infections and 23,000 deaths each year. This public health concern has prompted ICCR members to call on restaurant chains and meat producers to develop sourcing policies that restrict antibiotic use in food production to therapeutic use only.
ICCR members have been pressing meat companies such as Hormel, Tyson and now Sanderson Farms to address the risks of antibiotic resistance for more than a decade. The practices of leading North American companies and several European countries, most notably Denmark, have shown that antibiotic use can be significantly reduced when meat is sustainably raised without significantly impacting production. In 2015, investors expanded their focus to include restaurant chains such as McDonald’s, Darden, Wendy’s, Burger King, Yum! Brands, Jack in the Box, and Starbucks.
ICCR’s antibiotics initiative challenges food companies and restaurant chains to:

Nadira Narine, who coordinates the antibiotics initiative for ICCR observed, “There is significant push back from consumers and public health groups against industrial farming practices, including antibiotics overuse.Our investor members see these concerns as clear risks. We believe companies that address these concerns and fill the growing demand for sustainably sourced meat will be better positioned over the long-term.” Several companies are stepping up to the challenge including Tyson, and fast food chain Wendy’s and McDonald’s among others, but there is room for improvement in these policies. ICCR’s engagement with McDonald’s, for instance, resulted in a positive initial step one year ago when the company established and quickly implemented a policy to source only chickens raised without antibiotics essential to human medicine. The policy, however, does not encompass beef and pork — mainstay meats in the restaurant’s menus, and is only applicable in the United States. ICCR’s investors are pushing McDonald’s and other companies to expand policies to include all the meat products that it serves and set global sourcing targets with timelines for pork and beef. A resolution to this effect was filed last year by the Congregation of Benedictine Sisters, Boerne TX and received 22.6% of the shareholder vote. A similar resolution is on the ballot again in 2017. Sanderson Farms received a shareholder resolution this year from As You Sow and the proposal, which was supported by the proxy advisory service ISS, received 30% of the shareholder vote. Moreover, in response to another resolution filed by As You Sow and later withdrawn, Restaurant Brands International, owner of Burger King and Tim Hortons restaurants, announced late last year that it will be moving to antibiotic-free chicken. Starbucks and Jack in the Box also made commitments on chicken (in the US) as a result of shareholder engagement. In September, ICCR participated in a Global Investor Statement on Antimicrobial Resistance with ShareAction, FAIRR and As You Sow, which called on food companies, including meat producers, restaurants and retailers, to safeguard the efficacy of antibiotics important in human medicine by ending their use in their operations and global supply chains. The statement was endorsed by 78 organizations representing over $ $675 billion in assets under management, again underscoring the importance of the issue to the responsible investment community.

The Interfaith Center on Corporate Responsibility is a coalition of faith and values investors who advocate on a variety of social and environmental issues, including food safety and sustainability. ICCR website