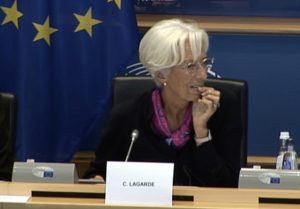 The president-elect of the European Central Bank (ECB), Christine Lagarde, has identified the planned EU taxonomy for sustainable finance as a key factor “holding things back” for the incorporation of environmental factors into the ECB’s policies.

The first woman to be nominated to the role, Lagarde said: “The current operators [of the ECB] tell me that you need market neutrality. Well yes, but if you have a taxonomy approved by the parliament I think that would have to be taken on board. We will have to look at how it can be applied in practice.

“I really hope that the taxonomy will be concluded successfully very soon because it really is currently holding things back not only for the ECB but … the private sector. I think the fact that there is uncertainty about the taxonomy and the classification and ranking of financial products is holding things back. The quicker you move the better it will be.”

The taxonomy is a key part of the EU’s action plan on sustainable finance.

These remarks were made as Lagarde, who headed the International Monetary Fund (IMF) for eight years, faced EU lawmakers for the first time in a hearing with the European Parliament’s Economic and Monetary Affairs Committee (ECON) ahead of a nonbinding vote on her candidacy later this month. MEPs do not have the ability to block her appointment as the ECB, and its staffing, are a matter for EU heads of state.

The taxonomy was also name-checked in a 38-page questionnaire completed by her as part of the nomination process and distributed to the committee prior to the session.

Once complete, the “taxonomy of what constitutes a green asset … will facilitate the incorporation of environmental considerations in central bank portfolios”, she said.

Currently, the legislation underpinning the green taxonomy is still being thrashed out in political negotiations between the European Council and Parliament, while the technical details are currently open for public consultation by the European Commission.

Climate change emerged as one of the key themes the nearly three-hour session, with six out of 24 questions posed by ECON members concerning the ECB’s response to the crisis.

Throughout the session, Lagarde consistently rejected using targeted purchases of green assets, such as green bonds, under the ECB’s quantitative easing program as this would distort prices due to the low volume of issuances as a share of the overall market.However, she suggested that if the ECB “signals its interest to increase its holdings” of the emerging asset class, it could encourage more issuances from the market thus making the assets eligible for acquisition by the ECB.

Lagarde was more receptive to clearing the ECB’s balance sheet of assets associated with fossil fuels.

She said: “On the amount of carbon assets being held by the ECB, now obviously things can’t change overnight but if we move to a gradual transition to eliminate these types of assets is something I think that needs to be done if we are convinced of the absolute need to combine our strengths in our institutions to fight against climate change.

“We will look at how we can improve our carbon stats when these bonds reach maturity.”

In November 2018, RI reported the ECB saying that EU central banks own 20% of all non-bank corporate green bonds out of Europe.

But Lagarde offered an additional policy lever at the ECB’s disposal: the “risk assessments that central banks carry out in their role as supervisors”. By including climate considerations into the criteria, she suggested that risk weightings could be amended.

Lower risk weightings for green assets would mean that financial institutions would have to put aside a lower amount of capital to reduce the risk of insolvency. Or policymakers could also introduce a higher risk weighting for brown or polluting assets. These approaches are known as a “green supporting factor” and “brown penalising factor” accordingly.

Perhaps the most concrete policy idea to emerge from the session was a commitment to direct ECB’s pension scheme to invest in line with green principles made in response to a question asking for a “stronger and bolder” approach to climate.

“There is a pension fund which is managed by the ECB which can certainly take a decision on where to invest”, she said.

Finally, Lagarde suggested closer cooperation with the Network for Greening the Financial System (NGFS), a group of central banks on environmental issues, under her presidency.

Referring to the network she said: “In my view, the ECB should contribute substantively to this effort and devote significant resources to this process. This includes taking seriously the recommendations of the group and acting on them wherever possible without undermining the ECB’s price stability mandate and other objectives.”