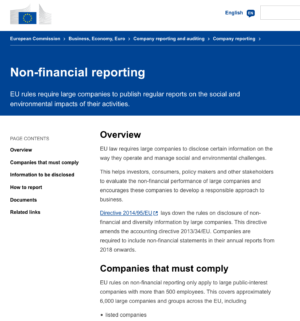 Frank Bold, the public interest law group focused on company law issues, has warned that the implementation of the EU’s Non-Financial Reporting Directive remains unclear when it comes to materiality, one of the key issues of the legislation.

In a 52-page report, part of Frank Bold’s Purpose of Corporation Project, the firm has studied the way in which the directive has been implemented in a sample of four countries: the UK, Germany, France and Italy.

The report states: “There remains inadequate clarity around the definition of ‘materiality’ and therefore the extent of information that should be provided in the report.”

The directive (2014/95/EU in the jargon) lays down the rules on disclosure of non-financial and diversity information by large companies.

The EU legislation refers to the inclusion in companies’ management reports of a “consolidated non-financial statement” containing such information, “to the extent necessary for an understanding of the group’s development, performance, position and impact of its activity”.

Frank Bold’s report warned that until the “materiality test” (determining what information on each ESG factor should be reported) remains ambiguous and unclear, “inconsistencies in the scope of reporting between companies and jurisdictions” will likely impair corporate reporting.The report identified gaps in the directive, whose transposition by each member state has not been adequately addressed, adding that further information on the materiality test should be provided, and that integration with other non-financial reporting systems needs to be strengthened.

It welcomed the approach of both the UK and France to go beyond the directive’s obligation and require the non-financial information statement be included in the annual management report.

Such integration “will give gravity and prominence” to the statement as it will be shared with shareholders ahead of the AGMs, as opposed to Germany, where companies will prepare a separate report.

When it comes to the assurance of non-financial statements, the directive opened the door to a simple form of audit of such disclosures, just a check that a statement has been produced by the statutory auditor.

It formulated, as a member state option, that further assurance could be extended to the content of the disclosure itself.

According to Frank Bold, Italy requires that the internal and external audit of the statement should be published, and the internal audit shared ahead of the AGM; while the UK is the only state requiring an audit “for material misstatements”.

Regarding the scope, the directive used the concept of Public Interest Entities which have also more than 500 employees on average, which as a state member option could have been extended to include more companies.

None of the four countries examined did so, unlike Denmark and Sweden that reduced the threshold to 250 employees, the report stated.

In a separate study by the Global Reporting Initiative (GRI), CSR Europe and Accountancy Europe, the three organisations looked at the technical aspects of the implementation, offering a comparative outlook of how each jurisdiction has transposed the range of member state options granted by the directive.