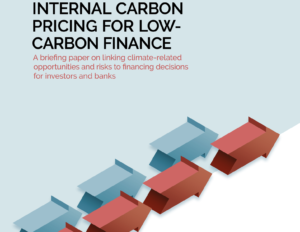 A new paper providing a framework for investors and banks to develop an internal carbon price has been published — as EU carbon prices hit a high of €29.27 per tonne this week.

The paper, Internal Carbon Pricing for Low-Carbon Finance, has been co-written by the Generation Foundation, consultancy Navigant and CDP.

They say it provides actionable insights into how investors and banks can develop an internal carbon price to manage climate risk.

Over 40 national governments and 25 local governments are putting a price on carbon. But, the paper argues that these carbon prices are often too low to incentivise meaningful decarbonisation.

Recently, the world’s largest reinsurer Munich Re called for a higher carbon price in Europe at €115 per tonne.

Instead of policymakers, the paper’s authors say, the private sector can lead in unlocking the full mitigation potential of carbon pricing and send a signal to policy makers.

Kaboo Leung, Senior Consultant at Navigant, said investors and banks needed to look beyond the market price for carbon. “They need to look into future price and stress test what the profitability of your investment would be in the future price under a more ambitious climate policy. But also what are the implications from your supply chain. So what are the hidden costs that are not covered by the market price and still relevant to the financial well-being of companies?”

For investors, the report suggests internal carbon pricing (ICP) can be an ESG screening criteria, a factor for index weighting, a topic for company engagement or a way to adjust the cash flow for fundamental analysis and valuation.

For banks, ICP could highlight potential loans or credit lines with high carbon risks, justify the interest rate for ESG-linked loans or act as a green supporting factor or brown penalty factor.

BNP Paribas Bank has a methodology based on a carbon price assumption of between $25-49 per tonne of CO2 that it uses for carbon-intensive sectors.Speaking on a webinar discussing the new paper, Mark Lewis, global head of sustainability research at BNP Paribas Asset Management (which recently launched a wide-ranging sustainability strategy), said it was stress testing for a situation where all goods consumed had carbon embedded into the price, sending a price signal to end consumers to buy less.

Describing it as “allocation efficiency”, Lewis said it was the next frontier in carbon price, “we think about it a lot,” he said.

Lewis also said the now-confirmed appointment of Germany’s Ursula von der Leyen as the next European Commission president signalled a tighter carbon price. “She’s talking about a bolder stance on climate change in Europe and a tougher level of emission reductions by 2030,” he said.

Von der Leyen, who was Germany’s former defence minister, has backed a target of a 50% reduction in EU carbon emissions by 2030. The current EU target is 40%.

“She’s also indicated willingness to raise this to 55%,” said Lewis. “It will require a significant tightening of the EU carbon market therefore higher carbon prices. It is a scenario we are testing for at BNP Paribas Asset Management.”

The approach would mean companies would be subject to a carbon tax on goods and services imported outside the EU, not in the jurisdiction of origin. This would help create a level playing field between the EU and other nations where environmental standards are not as stringent.

“If von der Leyen is approved it’s a bullish signal for carbon prices over the next five years,” said Lewis.

Von der Leyen was indeed confirmed as the next president of the European Commission this week by a slim majority in the European Parliament. She will take up her post on November 1.

In her final pitch to become European Commission president, she told the EU Parliament she wanted Europe to become the first climate-neutral continent in the world by 2050. She spoke about a creating a Green Deal for Europe in her first 100 days in office, creating a Just Transition Fund and unlocking a $1trn in investment over the next decade to support her climate goals.