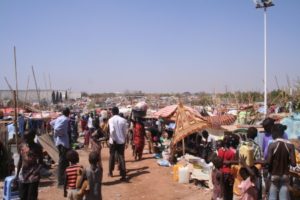 South Sudan is a neglected conflict. Since 2013, the fledgling country has been mired in a civil war that has displaced 5 million people, generating the largest refugee crisis in Africa. The peace agreement signed September 12 fails to solve the issues that have fueled the conflict, leaving the country likely to descend back into violence. But unlike the Darfur crisis, there is little public awareness and therefore no divestment legislation or broad-based sanctions. While South Sudan’s volatile state should prompt investors to take the risk-based approaches, investors and businesses have given little consideration to the crisis.
Lack of attention to South Sudan puts investors and corporations at risk of linkage to severe human rights violations. As in Myanmar (Burma), even when broad-based sanctions are not present or lifted, investors must conduct enhanced due diligence for companies with ties to conflict areas to avoid both risks to reputations & operations and the risk of fueling crises. But positive impact is possible – strengthened conflict-zone due diligence, along with corporate engagement and public policy work, are a means for investors to address human rights and social issues included in United Nations Sustainable Development Goal (SDG) 16: Peace, Justice, & Strong Institutions.
Two key factors make South Sudan a particularly high-risk environment for business: the struggle for control of oil reserves and other natural resources that is fueling the conflict; and that both the government and opposition are kleptocratic and complicit in the ongoing atrocities. Both the government and opposition forces target civilians, often along ethnic lines, killing tens of thousands of people and causing widespread food insecurity, famine, and displacement.
South Sudan has one of the weakest economies in the world and is almost fully dependent on oil revenues. Corruption is endemic; South Sudan ranked second to last, ahead of only Somalia, on Transparency International’s 2017 Corruption Perceptions Index. Close family members of President Kiir and his generals illegally hold stakes in oil, mining, construction, engineering, gambling, banking, telecommunications and aviation operations, as well as government and military procurement.
South Sudan needs investment to rebuild the country following the devastating conflict, but sustainable development will only occur if profits and benefits are broadly shared rather than flowing to those responsible for the conflict. Investors should work to avoid this risk and involvement with human rights violations by devoting extra scrutiny to high risk sectors.
In South Sudan, the highest risk sectors are extractives, including oil & gas, and weapons. At Domini we exclude fossil fuel owners and producers, and weapons manufacturers; but in a conflict zone, abuses can occur in other sectors – from information & communication technology to financial services relating to censorship, corruption, forced displacement and land grabs.When evaluating a company operating in South Sudan, investors should consider whether the company is responding appropriately to the difficult environment. Do they have enhanced human rights due diligence and disclosure, or is there a pattern of problems and controversies? Given South Sudan’s extensive kleptocratic networks, investors should also evaluate the potential risks arising from the company’s business partners and contracts and who benefits from the company’s products and services.

For example, following South Sudan’s independence from Sudan, several major oil companies and their service providers resumed operations immediately. By extension, they also involved their financiers and insurance providers in this risky environment. Unsurprisingly, operations had to be repeatedly suspended, and workers and communities were put at risk of violence. The oil companies’ South Sudanese counterpart was eventually targeted for individual sanctions and the South Sudanese government, which is accused of war crimes, is the local controlling owner. The companies’ operations are also still at risk from the widespread corruption and potentially contributing to the war by directly or indirectly financing the warring parties and their affiliates.
Positive impact from operations in unstable regions is also possible when investors and companies work to support local partners, as referenced in SDG 17, Partnership for the Goals. Investors should encourage companies to support institutional capacity building, provide employees and local communities with training and access to necessary products and services. All companies must also work to promote international human rights standards and take actions towards mitigation and remediation, in accordance with the UN Guiding Principles on Human Rights and Business.
When investors perform enhanced due diligence, engage companies about the impact of their operations, and encourage policy action, they can have a positive influence on difficult situations, including in South Sudan. If investors fail to take these steps, they risk damage to their investments and the possibility of exacerbating human rights violations. Investors have unique tools and a strong voice to influence companies, policy, and public awareness, and should employ them so that South Sudan and its people do not remain neglected.