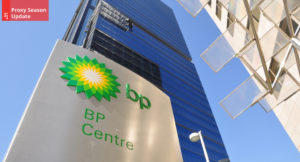 A record 21% of shareholders backed a proposal from climate activist Follow This’ at BP yesterday, asking it to set Paris-aligned decarbonisation targets for its Scope 1, 2 and 3 emissions.

The tally was more than double the 8% support the resolution achieved in 2019 – a noteworthy increase given the events of the intervening year. In 2020, Follow This withdrew the resolution after BP agreed to collaborate with the campaign group on a proposal for the 2021 AGM. However, the unlikely partnership broke down over a difference in ambition, and Follow This went back to drafting a solo resolution, again requesting Paris-aligned targets.

BP’s board urged shareholders to vote against the request. Among those to oblige were CalPERS, one of the founding members of shareholder engagement group Climate Action 100+ (CA100+) and sovereign wealth giant Norges Bank Investment Management. Dutch pension fund manager APG abstained, while fellow CA100+ member the Office of the New York City Comptroller, which oversees the City’s five public pension funds, supported it.

The result at BP came just a day after the same proposal was put to Norwegian state-backed oil firm Equinor. Here, 39% of non-government votes backed the resolution – up from 27% last year. However, when government shares are factored in, support amounts to just 5.6%. Still, the increase was impressive given that influential proxy advisor ISS changed its recommendation from last year, advising a vote against this year’s proposal.

Europe’s largest oil majors, including BP and Equinor, all unveiled 2050 Net Zero ambitions last year. The statements divided investor opinion, with some seeing them as evidence that engagement is effective while others voiced suspicion at the lack of detail being offered.

Interestingly, CalPERS supported the Follow This proposal at Equinor, despite opposing it at BP (it has also confirmed that it will not support it at Shell next week, joining the Church of England Pensions Board).

Simiso Nzima, Investment Director & Head of Corporate Governance for Global Equities at CalPERS, told RI that the BP resolution was deemed to be “duplicative” because the company has already set short-, medium- and long-term emission reductions targets for Scopes 1,2 & 3.

“What we don't want to do is to penalise progress,” he said. “We don't think that we're giving the company a free pass because we will continuously monitor this, this is an engagement which is ongoing”.

Nzima added that if CalPERS does not see progress, it may vote against directors.

Equinor, on the other hand, has not yet explained how it will meet the Net Zero ambition it announced in November over the short and medium term. This, said Nzima, is why CalPERS supported the Follow This proposal in that instance. Equinor is expected to provide such details in June.

Majority support for Follow This proposals at US oil giants

The increased support for Follow This’ proposals at European oil majors has, however, been eclipsed by the results of votes at US peers this week.

The campaign group’s proposal at ConocoPhillips, which called for reduction targets for all its direct and indirect emissions, was supported by 58% on Tuesday. Then yesterday, the same proposal at Phillips66 garnered more than half the vote, according to Follow This – although the final result is yet to be disclosed.

Both ConocoPhillips and its rival Chevron tried to strike the proposal off the ballot earlier this year via the Securities and Exchange Commission, telling the regulator that the requests, which are less demanding than those at European oil majors, fell foul of the rules on micromanagement. ConcoPhillips also attempted to argue that it had substantially implemented the proposal. As is becoming increasingly common under the Biden Administration, the SEC dismissed both those arguments.

Last week, 51% of shareholders supported a proposal at US-based Duke Energy calling for greater transparency on its political spending – a theme RI identified in its recent AGM series. Ahead of the vote, State Treasurers for Illinois, Vermont and Connecticut all announced that they would vote against Duke’s CEO and Chair, Lynn Good, and its Lead Independent Director, Michael Browning, in response to governance failings on climate. All board members were reelected, including Good, with 92% support, and Browning with 88%.

The board-endorsed proposal at Bunge, requesting a policy on deforestation in supply chains, was supported by a near unanimous 98.88% of shareholders last week. “The vote should be a signal to other companies in the Brazilian soy supply chain that investors are on high alert about these risks,” said Leslie Samuelrich, President of Green Century Funds, which filed the resolution.

Two-thirds of shareholders in US private prison firm GEO Group supported a lobbying disclosure proposal filed by US labour union SEIU. Last month, CtW Investment Group called on GEO’s shareholders to vote against five board members on the grounds of poor governance, particularly around human rights. All directors were reelected at the group’s annual meeting on 28 April.

Another lobbying proposal filed by SEIU, this time at US pharmaceutical firm Eli Lilly, was supported by close to half of shareholders (48%) last week.