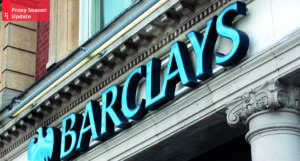 Both ISS and Glass Lewis are opposing AstraZeneca’s proposed pay package for its CEO Pascal Soriot, which, if approved, would see his potential pay soar to 900% of his reported £1.3m salary, depending on performance targets.

It is the second year in a row that the UK-based pharmaceutical firm has sought a significant increase in pay for its chief.

CalPERS and the Office of New York City Comptroller have also disclosed that they will vote against the pay policy, but Norges Bank Investment Management will support it, according to its voting platform. AstraZeneca’s annual meeting takes place on 11 May.

And today saw another revolt over pay, this time at Rio Tinto. More than 25% of votes were cast against the mining giant’s remuneration report, representing a ‘first strike’ under Australian corporate law – meaning that the company’s next remuneration report will have to explain the extent to which shareholders’ concerns have been taken into account.

Pushback against Rio Tinto’s pay plan was anticipated, and centred on criticism over the generous exit package awarded to its former CEO, Jean-Sébastien Jacques, and two other senior executives, in light of the destruction of the Juukan Gorge.

As part of that package, Jacques received total remuneration of £7.2m in 2020 and may receive more payments over the next few years, according to BlackRock, which voted against the proposal, stating that it “did not adequately reflect the severity of the destruction of the Juukan Gorge and the resulting damage to the environment, relevant communities, and the company’s social license to operate”.

Earlier this week, RI also reported that just under 60% of shareholders voted against the Say on Pay vote – the advisory shareholder vote on executive pay – at US conglomerate General Electric (GE).

Rio Tinto’s AGM also saw an incredible 99% support for two proposals on climate – one on lobbying and the other on setting emissions reduction targets. Earlier this year, the mining company took the unprecedented step of recommending that shareholders vote in favour of both.

This year has seen a growing number of companies back ESG proposals, a new trend which has resulted in sky-high tallies.

In the US, for instance, 98% of shareholders supported a climate proposal at General Electric this week, after the company encouraged them to do so. That proposal called on General Electric to report on its progress against the Climate Action 100+ Net Zero Company Benchmark, the new tool developed by the $54bn investor engagement body to chart target companies’ progression decarbonisation.

Last week, a proposal at IBM asking for an annual report on diversity and inclusion, which the tech titan backed, was supported by 94%.

We are likely to see another big vote next week at TMX Group, the owner of the Toronto Stock Exchange, after it announced that it would back a shareholder proposal on racial diversity and indigenous inclusion at its annual meeting (12 May).

CalPERS was among the minority (14%) of shareholders to support a key climate proposal at Barclays yesterday, which called on the UK banking group to phase out its fossil fuel funding in “timeframes consistent” with the Paris Agreement.

A number of big investors sat the vote out, including investment behemoth BlackRock, Dutch pension fund manager APG and Canada’s BMO Global Asset Management, who were among the 12% of shareholders to abstain.

Last year, BlackRock voted against a similar shareholder proposal at Barclays, but hinted in its latest voting bulletin that it would have supported this year’s proposal had the wording not been “ambiguous”.

“Our decision to abstain from the vote on the resolution was down to its ambiguous wording which, as a legally binding resolution, [BlackRock] is unable to support”, it wrote, taking issue with the “vague” use of the term ‘financial services’, which it argued is “broad and includes many activities beyond those highlighted in the resolution”. It also found the resolution to be “insufficiently specific on embedded timelines and evidence of progress”.

Both ISS and Glass Lewis recommended a vote against the proposal, which was put forward by non-profit Market Forces. New York City’s public pension funds, which tend to be relatively progressive when it comes to shareholder proposals, voted against it, as did Norges Bank Investment Management.

In response to the result, Market Forces said “Barclays’ institutional investors have some serious questions to answer about their commitment to climate change action”.

According to the most recent Rainforest Action Network report, Barclays provided $27bn in fossil fuel financing in 2020, making it the seventh largest financial backer of the sector since 2015.

“Having seen Barclays’ climate policies fail to rein in its investments in fossil fuels in the last year, to have investor support for climate change action drop this year compared to 2020 smacks of either indifference or incompetence from many major investors.”

Yet another corporate ‘Say on Climate’ vote has passed with near unanimous approval, after 97% of shareholders approved Canadian National Railways’ climate plan last week. Investors have already approved the climate strategies of financial service firm Moody’s and French construction firm Vinci with similar levels of support, despite concerns about ‘Say on Climate’ votes raised by some of the US’ largest public pension funds.

Interestingly, however, a proposal calling for the introduction of an annual advisory vote on Charter Communications’ climate strategy was supported by 38% of shareholders at the US telecommunication firm’s annual meeting last Friday.

BlackRock and APG were among those to back that proposal, which was filed by Sir Chris Hohn’s hedge fund The Children’s Investment Fund (TCI). The ‘Say on Climate’ campaign is the brainchild of Hohn, but it has divided those in the responsible investment world. US public pension giants CalPERS and the Office of New York City Comptroller voted against the introduction of such a vote at Charter Communications, as did Norges Bank Investment Management.

Around 31% of investors backed the ‘racial equity audit’ proposal at Goldman Sachs last Thursday – another healthy outcoming for the pioneering proposal, which has been filed at eight US financial heavyweights this year by CtW Investment Group and US labour union SEIU. Earlier in the week, the same resolution drew the support of 37% of shareholders at Citigroup and 12% at Wells Fargo. Proposals filed at BlackRock and Morgan Stanley were withdrawn after both firms agreed to undertake a diversity review. Its next outing will be at State Street (19 May).

Standard Bank has not said if it will accept a shareholder proposal on the climate risks associated with its lending this season. Last year, the Johannesburg-based banking group refused to table a similar proposal – also filed by activist Just Share – reportedly arguing that such votes are a “last resort measure”. Just Share said it has received no word from the bank on if it will allow the resolution to go to vote this year, despite filing the proposal on 23 April. The non-binding proposal asks Standard Bank to report on its plans to develop a strategy and targets to bring its lending in line with the goals of the Paris Agreement.

Last week, a proposal calling on US health insurer Cigna to report annually on its gender pay gap was backed by 32% of investors, up on the 21% support it garnered last year, but slightly down on the 35% in 2019.

Just shy of a quarter (23%) of shareholders supported a lobbying proposal at Citigroup last week, which called on the bank to provide “full disclosure” of its direct and indirect lobbying activities.

Only 8% of shareholders supported the proposal at PNC Financial Services, calling on the US financial services firm to report on the effectiveness of its internal systems at managing risks associated with financing activities within the nuclear weapons industry.