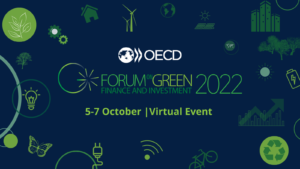 I was the Master of Ceremonies for last week’s OECD Forum on Green Finance and Investment, broadcast digitally from the organisation’s headquarters in Paris.

It’s an interesting event because of the OECD’s broad reach across global policymakers, regulators, business and finance leaders. This year the theme was “Moving from commitments to actions in the decade for delivery: towards impactful green and sustainable finance”.

Urgency is, as ever, the buzzword in these conversations. But how “urgent” is the response?

Matthias Cormann, secretary general of the OECD, said a new guidance document on transition finance for policymakers and corporates/finance sought to unlock the flow of financing to credible plans to decarbonise business models towards net-zero emissions, while mitigating risks of greenwashing and carbon lock-in. It sets out 10 key elements for credible corporate climate transition plans.

He also urged action on biodiversity loss and ecosystem services, noting that the latter have estimated economic benefits of $125 trillion-$140 trillion per year.

“The depletion of nature is now occurring at the fastest rate ever in human history,” he said. “Last year, at the request of the G7 presidency of the UK, the OECD prepared a policy guide on biodiversity, natural capital and the economy with recommendations for the financial sector, including to embed biodiversity considerations into due diligence risk management processes. This year, we will launch an ambitious new project to translate biodiversity and nature risks into financial risks.”

Amaya said Japan’s Ministry of Economy, Trade and Industry had also announced in February the establishment of a Green Transformation Strategy, bringing together leading companies, government and academic experts for the transition to carbon neutrality. By the end of March, 440 companies had signed up. The project is due to kick off in 2023. A ¥2 trillion ($14 billion; €14 billion) Green Innovation Fund Project, set up via the New Energy and Industrial Technology Development Organization, will also provide 10 years of continuous support to business-led decarbonisation initiatives.

But as Helena Viñes Fiestas, commissioner at the Spanish Financial Markets Authority and Co-rapporteur for the EU Platform on Sustainable Finance, pointed out, we need to go on a serious carbon diet, yet we’re busy piling on the pounds as emissions rise.

We now need to “walk the talk”, she said. “Show what you plan to do, how and by when, and then report every year on the progress made. And very importantly, voluntary credits cannot count towards interim targets. They should be disclosed separately. Offsets cannot buy time to delay actions. They can divert attention from much-needed investments in technological solutions.”

Jo Tyndall, director, environment directorate at the OECD, added that net-zero targets also need to reach emerging markets and developing economies, as well as micro, small and medium-sized enterprises. “Transition finance has to focus on the dynamic process of becoming more sustainable,” she said. “It’s an evolution rather than relying on a point in time assessment of what is currently sustainable. This is the starting point of the OECD guidance that was just published.”

So where are we on that financing path?

In a high-level plenary entitled ‘The way forward for transition finance’, Sean Kidney, CEO of the Climate Bonds Initiative, cited a couple of building and energy stories as an example of required action and steps being taken.

“We have 78 percent of steel plants in China and 70 percent in Europe coming up for rebuilding by 2030,” he said. “We need to build electric furnaces, recycle steel and for the energy input to be hydrogen-based. That’s a transition story that we need to understand. We have to get the appropriate emission targets, sector by sector, and back that via the EU taxonomy or the Chinese Green Bond Endorsed Projects catalogue. Luckily the Chinese and now the US governments are massively subsidising green hydrogen, so we’re going to see very quick changes there.”

Backing into the green bond theme, Nicholas Pfaff, deputy CEO of the International Capital Market Association, said issuance had reached the $1 trillion annual level, which was financing a lot of renewables. But he said he sees an increasingly positive role for sustainability-linked bonds that track the emissions reduction trajectory at an issuer level, with related penalty targets, which he predicts will reach $150 billion issuance this year. “I think it’s particularly promising because it allows you to influence holistically the transition issues that a company faces.”

Eugene Wong, CEO of Sustainable Finance Institute Asia, said taxonomies, transition plans and disclosure were now key. At the same time, he highlighted Asia’s diversity in terms of economic and social structures and resources for transition. “We need different pathways for different sectors in different countries,” he said.

He noted that the ASEAN taxonomy, first released in November last year, allows for remedial measures to transition, enabling work to minimise or reduce risks rather than veto them. “This means that we may have to pair mitigation with adaptation, for example.”

One country ploughing ahead with its regulatory response is Singapore. Carolyn Neo, chief representative of the Monetary Authority of Singapore (MAS), said the country’s taxonomy traffic light system aimed to make it easy to identify genuine transition from harmful activity.

“Our industry taskforce has done a public consultation on the criteria for three core sectors. We will consult on five more sectors in the coming months. Regionally, we are working on a taxonomy and also supporting global efforts on a common ground taxonomy.”

Recordings of all of the panel sessions at the OECD Forum on Green Finance and Investment can be accessed at its website: