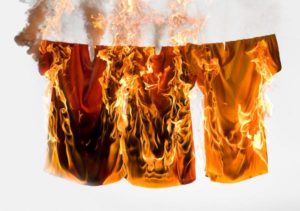 Five years ago, an eight-storey building in Bangladesh collapsed, killing more than 1,000 people and injuring more than 2,500 others. What was revealing about the Rana Plaza tragedy was that, as structural cracks began to widen throughout the building in the days and hours leading up to the collapse, workers from its bank and shops were sent home and told not to return. Almost all those who were working on that fatal day were from the building’s several garment factories. They knew about the cracks – caught on camera by the local media the day before, prompting an evacuation and two inspections – but were not shown the same regard as their fellow tenants: ordered back into work after the building’s owner deemed Rana Plaza safe, some were allegedly told they would have a month’s wages withheld if they didn’t comply. It was a stark reminder of how the pressures of ‘fast’ fashion too often trump workers’ rights in the industry. The tragedy made headlines all over the world, and many high street names were linked to the factories: according to the Clean Clothes Campaign, Benetton, Mango, Matalan and Primark were among a long list of well-known brands sourcing clothes from Rana Plaza.
The tragedy, and the subsequent public backlash, prompted the creation of The Accord on Fire and Building Safety in Bangladesh – a collaboration between the industry, NGOs and trade unions. The document, laying out legal standards for those involved in the country’s garment manufacturing industry, garnered signatures from 220 brands across the globe.
“The Accord has been really helpful because it saw the industry come together and agree on one standard for auditing and remediation action,” says Henrike Kulmann, an ESG Research Analyst at Allianz Global Investors. “That really helps factories on the ground to understand the expectations and know how to meet them.”
The Accord’s five-year lifetime came to an end last month, however, and its updated version has so far failed to secure the same level of backing. Since investors issued a collective statement encouraging brands to reiterate their support, the number of signatures has gone from 60 to 170, but there are still more than 50 names missing, including Abercrombie & Fitch (A&F), Bebe Clothing and Vistaprint; and there are many more than have signed neither Accord, despite sourcing clothes from Bangladesh – the second largest ready-made garment manufacturer in the world.
When asked why A&F had not signed up to the new Accord, a spokesperson told RI it was “actively reviewing and evaluating” the framework. “In the meantime, for those factories still working on corrective action, A&F is providing funding to support their efforts,” he added. “A&F remains steadfast in its commitment to being part of a long-term solution for continuous on-going safety, in line with the commitments it has made in Bangladesh, and elsewhere throughout its global supply chain.“But in reality, there has been little movement beyond Bangladesh for the industry. Kulmann says companies have been “working together collectively” to improve sustainability and transparency around sourcing practices in other key markets, but so far no equivalents to the Accord have been established. “It would be useful from an investor perspective to see if this model could be replicated in other countries, but so far it doesn’t seem to have been possible,” she concedes.
So, has the fashion industry lost interest in dealing with environmental and social risks now that Rana Plaza has fallen out of the headlines?
It’s important to note that many of the big names in the ‘fast’ fashion industry have not been faring well over the past 12 months when it comes to performance. Associated British Foods – the company that owns Primark – has seen its share price fall from 2,997p to 2,699p over the year, while Inditex – the biggest fashion group in the world and owner of brands including Zara, Massimo Dutti and Pull & Bear – has suffered falls from €36.67 to €28.48 over the same period. Hennes & Mauritz, better known as H&M, is in a similar situation, with its share price dropping from SEK218.6 to SEK138.46.
But it is difficult to know how much of this – if any – is driven by sustainability concerns from consumers. One of the big challenges around ESG in fashion is that it’s hard to quantify its material impact.
Kulmann says supply chain management is a good investment indicator for broader operational quality, and in that respect should be viewed as a financially material issue. Social problems can also trigger strikes, which could slow down production, compromise quality and ultimately impact sales. “But in terms of direct impact on sales, we haven’t really seen controversies like Rana Plaza create momentum for consumers to change their buying behaviour yet.”
Neil Brown, Partner and Fund Manager at London-based Liontrust Asset Management, agrees, saying that “although people respond to surveys saying they care about these issues, at the till it isn’t yet materially changing their purchasing decisions”.
But timeframes are a major part of the equation, he says.
“If there’s an M&A announcement, the City knows how to respond to that very quickly. But we’re talking about the fact that, over the next five years, the consumer is likely to become disillusioned with fast fashion, and brands will need to find extra resources to respond to that, and someone needs to absorb those additional costs. That isn’t easy to model in, so it’s not reflected in short-term share prices, but it doesn’t mean this isn’t a material risk for investors.”
In terms of consumer habits, Brown says the key lies in transparency. “It doesn’t make a difference at the till yet, because people don’t have enough information to make decisions about which pieces of clothing they’re comfortable buying.”

On this last point, things are beginning to change. Last month, Fashion Revolution – a campaign group focused on supply chain transparency – launched its fifth Fashion Revolution event, during which hundreds of thousands of consumers targeted their favourite brands on Twitter using the hashtag #whomademyclothes. The campaign grew 30% in terms of public engagement this year, compared with 2017 and company response is expected to have grown too, although that information will not be collated until the summer.

“The next challenge is related to water and waste and it’s totally different from anything the industry has faced so far” – Sebastien Thevoux-Chabuel, Comgest

“Transparency will be a key driver of impact,” agrees Jason Kibbey, CEO of the Sustainable Apparel Coalition (SAC), an NGO that requires its members (fashion manufacturers, brands and retailers) to provide environmental and social performance data in a bid to standardise and aggregate disclosure. He predicts that “the availability of more information about materials, supply chains, companies, and products will create a race to the top”.
But there are potentially bigger investment risks afoot for the fashion industry, and their costs look set to be more quantifiable in the near-term.
“The pendulum has swung,” observes Sebastien Thevoux-Chabuel, ESG Analyst and Portfolio Manager at French asset manager Comgest. “The conversation around sustainability in fashion used to be very socially related: human rights, working conditions etc. But the next challenge is related to water and waste and it’s totally different from anything the industry has faced so far. It’s on a different scale.”
According to WWF, it can take more than 20,000 litres of water to produce enough cotton for a t-shirt; and almost half the world’s cotton comes from China or India, both of which face severe levels of water stress. In December, China expanded water taxation pilots to cover more provinces. It is seeking to introduce a system in which groundwater and surface water use is chargeable (as it has been for years in the country), but with provinces being able to hike up the prices depending on local conditions.According to China Water Risk, the original pilot has already prompted high-usage sectors to reduce their water extraction by more than 30%. Regulation is also being introduced around waste and recycling.
“There are a lot of plants and factories in China that are already closing because they can’t afford the kind of investment required to bring them in line with these new regulations,” says Thevoux-Chabuel. “And China has made it pretty clear that cotton is going to become a much smaller strategic element of its economy, given the pressure it puts on the country’s water supply.”
Unlike social issues, environmental issues will have a direct, steady impact on the operating costs of many fashion companies, and this may move the needle for investors, as they watch profit margins slide for those brands that don’t address the risks efficiently – and even those who do.
But there are opportunities, too. “The big challenge for the fashion industry over the next five to ten years is how it will reinvent itself to be more sustainable,” suggests Thevoux-Chabuel. He points to potential business transitions “which are possible for some of the big companies, although not all”, like clothing hire – a growing trend in the US and UK.
And it’s not just opportunities for the big companies to reposition themselves ahead of the pack. “On the environmental side, it’s been easier to move to opportunities than it’s been in terms of social issues,” says Liontrust’s Brown. “We’re now actively looking at – and finding – investment opportunities around smaller companies that can develop solutions that the large companies will require if they want to survive. Water- and energy- efficiency tools, for example, or alternatives to cotton.”
Currently, Brown says, the fashion industry is facing a challenging long-term relationship with its end client. “Fast fashion has a certain feel about it, and that feel is being impacted by concerns over the way it’s produced. If you look at the way share prices have fared over the past three years, the industry doesn’t have the same strength of reputation that it used to, and unless it acts fast, the industry will not have the success it’s enjoyed in the past.”

This article is one of RI’s ESG Frontiers series. Previous topics to feature in the series include palm oil, shipping, opioids and private prisons.