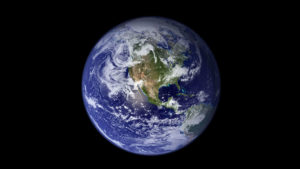 In a recurrent nightmare I’ve been having, I’m an intern at Galactic Macro, a hedge fund in the star system Alpha Centauri. An analyst—green-skinned, with a tall, cylindrical body, and lots of long thin antennae that stick out from his head like metallic angel-hair spaghetti—is presenting to a group of colleagues on a potential investee planet.

“Short,” says the Chief Risk Taker, her antennae drooping in boredom. She nods at me to enter the trade. I turn to the console before me, and enter the coordinates. They’re just numbers, and we do this all the time. But in the program we use, just before you hit “Execute,” a picture of the “underlying,” as we call it, comes up. And this time my screen fills with a familiar image: a big blue marble, floating in the blackness of space.

“No!” screams my mind, and they hear me, telepathically. But it’s logical, they all answer silently. Can you articulate an alternative thesis? And I desperately want to, but I can’t, and then I wake up in a cold sweat.

My daylight hours aren’t much more peaceful. I seem to have lost the capacity for denial that allows many people to just carry on after learning terrifying facts. It may because I’ve had cancer. While I’m doing well now, since 2017 I’ve been through surgery and chemo, radiation and drugs, and genetic testing that tells me I have a good chance of it happening again. I’ve integrated into my worldview the statistical probability (not high, but not remote either) that I might not see 2030, and I’m speeding life up, doing the things I’ve always wanted to do now. But I don’t think the investment world has yet integrated what science is saying about the state of Earth’s climate and biodiversity. Namely, that unless we make radical changes fast, the lifespan of our civilization—and obviously, its capital markets—could be measured in decades.

I’ve thought a lot about how to integrate that knowledge. And here are some things I think we in the field of socially responsible investment could do.

Markowitz, Schmarkowitz: Modern portfolio theory assumes an infinite future, and externalizes environmental costs. We need academics to write about how that theory must change for our current, extraordinary situation, in which the time horizon itself is threatened. One obvious change is to make the incorporation of environmental factors into investment the #1 fiduciary duty—a principle we should be agitating for the US Department of Labor, its Securities and Exchange Commission, and parallel bodies around the world to endorse.It’s the Amazon, stupid: We can’t afford to lose the world’s largest carbon sink and biodiversity reservoir. Any investor in Brazilian bonds should be pressuring its government to reverse its disastrous rainforest policy. Meanwhile, every publicly-traded extractive and agricultural company in the world should be facing investor demands to sign a “No Amazon Armageddon” pledge promising to do absolutely nothing in that region.

Pipelines? Really?: As the head of the International Energy Agency warned in late 2018, we have no room in our global carbon budget to build any more conventional fossil fuel infrastructure. A list should be compiled of every publicly traded utility, extractive company, and financial institution involved in the construction or financing of new fossil fuel pipelines and plants. The list should be made publicly available in an Excel file that contains company tickers and CUSIPS for all securities the firms issue. Next that file should be loaded into all investors’ portfolio management systems so that it will generate red flags. Then on every earnings call, these companies should be asked to explain how their involvement in these projects squares with any claim to corporate responsibility.

Indigenous thinking: Indigenous peoples control less than a fifth of the world’s land, but preside over more than three-quarters of its remaining biodiversity. Their traditional land management systems control forest fires and protect the climate, and their collaborative resource-sharing protects their societies from many of the West’s ills. It’s time investors stopped thinking of them as exotic or quaint, and recognized them as the thought leaders they are. We should work to help indigenous peoples retain or regain their traditional lands, and learn all we can about how to adapt their ideas to our lives. After all, their economic systems have endured for millennia, while industrial capitalism is in crisis after less than three hundred years.

Of course these things aren’t guaranteed to turn things around, but at the same time, they just might. I’m yearning for us to try them and see. I’ll freely admit there’s no universal logic to it: planets die, and are born, every day. But this one’s mine, and I love it—call it home-planet bias. Earth has potential, and I want it to live.