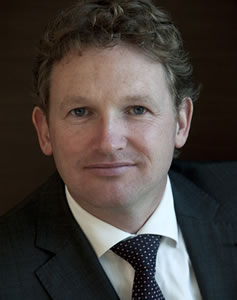 The word ‘sustainability’ is noticeably absent from Wim Bartels new job title. So too is any reference to ESG, responsible business or climate risk.

It’s a surprise, given that has he spent more than a decade as KPMG’s Global Head of Sustainability Reporting and Assurance and is still a member of the Financial Stability Board’s high-profile Task Force on Climate-related Financial Disclosure (TCFD). But now, KPMG’s newly appointed Partner in Corporate Reporting says he wants to take a more literal approach to sustainability.

“I’ve worked in sustainability reporting for 13 years. It was a learning curve, especially my work with the TCFD, but it ultimately made me realise that we need to move into a new era of reporting, where we understand that ESG is part of a broader concept of sustainable business. It’s not separate.” There is a gradual move towards integrated reporting, he concedes, “but that just avoids two documents – it’s not where this issue should settle.”

This realisation prompted Bartels to go to the board of KPMG and ask for a new job.

“I explained that I think this is the agenda we need to work on over the long term, and that I feel passionately about it. But things are also changing at KMPG more broadly – our audit department, for example, is doing a lot of work on the future of reporting. It’s something the wider industry needs to do, because accountants need to make sure that disclosure stays relevant, rather than just clinging to an old business model if it isn’t actually telling investors the full story.”

KPMG granted Bartels’ request and he resigned as Global Head of Sustainability in January, replaced by Adrian King. “We haven’t stopped working on ESG by any means. There’s still so much to do in that area,” he claims.

“But the word sustainability has come to be associated with philanthropic drivers, and that’s not what it is. So, although I won’t ignore the conventional topics – water, human rights, taxation, etc – I want to approach sustainability from a different angle, as part of a broader long-term picture. This is now about value, risk and opportunity, rather than about doing good for the world.”

Bartels argues that auditors have a number of roles to play in helping the market to move to a more sustainable model, starting with knowledge sharing and helping companies to identify relevant areas and indicators on which to report long-term value creation. “It’s our role to point out that reporting is not currently serving its full purpose. Reporting and disclosure is all we deal with, so we already know what a good report looks like. We need to start setting the agenda on that.” This will be a key part of his new role in coming months, he adds.He has also been seconded to the Corporate Reporting Dialogue, an international group of eight ‘standard setters’ including ISO, the International Integrated Reporting Council, SASB, FASB and the CDP. In this capacity, he’ll work on developing convergence between frameworks to reduce confusion and lessen the reporting burden for companies.

But it’s Directors’ Reports that get Bartels most animated. “There is so much attention on the financial statements of a company – its balance sheets and P&L. But the relevant information for decision making, especially for investors, is often also in the Director’s Report, as that’s where the company talks about its strategy and its vision for the future.”

The accountants’ role has been narrowed down to auditing financial statements, he says, and is limited to performing a ‘consistency check’ on Directors’ Reports, to ensure they are consistent with the audited figures and wider knowledge of the company.

“We’re the one party that looks at the full annual report, and we have a thorough understanding of our clients’ business, so we’re the logical party to trigger improvements in both financial reporting and Directors’ Reports.”

In practice, that means auditors should more readily flag up directors’ letters that don’t “tell the comprehensive story about a company” when put into the context of its management and internal processes – rather than just when they contradict the financials.

“Ultimately, I want to see Directors’ Reports explaining the pre-financial drivers for a company’s value,” says Bartels. “Then I want to see companies reporting on risks and opportunities in a more meaningful way: really addressing the fact that their business could be at risk from things like technological advances or climate change, or could see new revenue streams as a result.”

Much of Bartels’ thinking was crystalised by his work with the TCFD, which released its first recommendations earlier this year.

“The Task Force only looks at climate change, but it triggered me to think about the broader availability of forward-looking information in annual reports. If you’re a long-term investor, you should be able to incorporate 10-year forecasts into your analysis. Investors need to know if a company is going to exist in the future, and how it plans to ensure that. They might not agree with it, but that’s not the point: an investor simply has to know what the company believes.”
“I’ve worked with companies that have changed their value creation models every year for three or four years. That’s a good indicator that companies don’t yet have a comprehensive idea of which value drivers are important, and how to create long-term value. We clearly need to move forward with this.”