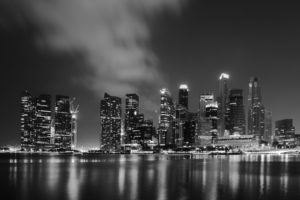 This December marks four years since the Paris Agreement was signed, a period that has seen global discourse turn from ‘climate change’ to ‘climate crisis.’ Accordingly, countries are now expected to increase the ambition of their emissions reduction pledges made in Paris in advance of COP26 in Glasgow, 2020. And just as countries need to take greater action to combat climate change, the same is true for the global banking sector.

A quick glance at the sustainability initiatives taken on by the banking industry since Paris gives a perception that the sector is on the right path to catalysing action on climate change. Boston Common recently engaged with 58 of the world’s largest global banks and found that 40 of 58 have endorsed the Taskforce on Climate-related Financial Disclosures (TCFD), one in four have signed the Principles for Responsible Banking (PRB) and 20% have used the CDP Financial Sector Pilot to inform their approach to reducing carbon emissions.

But take a closer look and it becomes clear that support for these initiatives is not translating into the scale of action needed to cope with the growing climate emergency.

Mind the gap between commitments and results

The engagement with 58 of the world’s largest banks, which has been ongoing for five years, found that these tools have not yet translated into changes in bank decision-making.

For instance, a majority of the banks disclose TCFD governance reforms (71%) and are carrying out climate risk assessments (78%). Yet 40% of banks have failed to develop any new financing or investing exclusions or restrictions as a result of their risk assessments.

Client engagement is even more concerning, with only half engaging high-carbon clients on TCFD implementation and transition strategies, and only seven banks have asked those companies to adopt TCFD guidelines.

The findings indicate a systematic reluctance by banks to demand higher standards from high carbon sector clients, despite the fact that doing so could vastly reduce bank risk.
The result is that lending and investment portfolios are not decarbonizing at a rate commensurate with the climate crisis as laid out in last year’s IPCC report.

That report highlighted that avoiding dangerous climate impacts requires limiting global temperature rise to a maximum of 1.5°C, in contrast to earlier targets of 2°C. The IPCC’s most recent report on land use also made clear that halting deforestation is key to preserving vital carbon sinks.

Yet Boston Common found that less than a third (29%) of banks have adopted an explicit 1.5 or 2°C Target in risk assessment or sector level criteria, and just 16% of banks require clients to have no-deforestation policies. Just 14% are asking clients to adopt time-bound certification standards associated with key soft commodities (palm oil, soy, cattle and timber products).It should not come as a surprise, then, that banks’ investment in fossil fuels continues to grow each year. From 2016 to 2018 investment in fossil fuels totalled $1.9 trillion, equal to the GDP last year of Brazil, the world’s ninth-largest economy. And while the growth of the green bond industry in the past decade has been impressive, rising from just $1 billion to $171 billion last year, this figure is still dwarfed by investment in fossil fuels.

The failure of the banking sector to change its lending and investment practices is not only a problem for the climate; it is also a missed opportunity for the sector. A new report issued by the Adaptation Commission calculates that investing $1.8 trillion by 2030 could reap $7 trillion in benefits, while the UN Environment Finance Initiative found that delays in tackling climate change could cost investors $1.2 trillion over the next 15 years.

What can banks do to effectively combat the climate emergency?

The banking industry has a pivotal role to play as we strive to avert a climate catastrophe. In order to enact real change, banks should set explicit targets to increase the proportion of sustainable finance commitments relative to their overall financing activities. Currently, less than half (45%) of banks have done this.

Another important action banks can take is to publicize their definitions of ‘low-carbon’ and ‘green’ investment. Critics have argued that many green finance commitments appear to be merely re-allocations or rebranding of existing commitments.

Additionally, banks need to draw a clear line in the sand and set concrete timelines for restrictions and phase-outs of financing for fossil fuels. They should also require clients to adopt no-deforestation policies in line with best practice (NDPE “no deforestation, no peat and no exploitation”) and have these commitments certified by third-parties such as RSPO.

Most importantly, we must see a cultural shift from the board all the way down to front-line bank managers. This includes the adoption of group-wide climate strategies linked to explicit decarbonisation and sustainable finance targets and metrics which are integrated into performance goals and compensation pay-outs. This needs to include a willingness to walk away from clients who are not performing on climate metrics. We know this is possible as Japanese banks have moved away from fully endorsing coal to adopting coal restrictions in less than two years.

The banking sector cannot continue to drag its heels. If we are serious about solving the climate conundrum, the banking industry needs to step up and deliver rather than hide behind incremental progress.