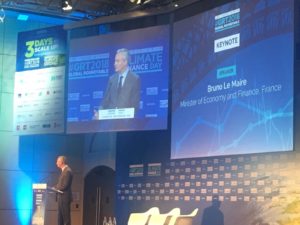 The French government is seeking to defuse a country-wide wave of protests over fuel prices – a part of which are due to carbon taxes – by pushing French banks to offer green loans for people to buy or exchange their vehicles for cleaner models. Bruno Le Maire, the French Economy and Finance Minister, said he wanted the loans to be “immediately available and financed as cheaply as possible, and useable for vehicle trade-ins.”
Le Maire was giving a keynote address at the UNEPFI Global Round Table in Paris yesterday (November 26). Despite the protests, Le Maire indicated that the French government was doubling down on its green finance strategy by insisting that all of France’s part state-owned companies would have to put in place a clear strategy for the reduction of CO2 emissions, and to report on those actions in their annual sustainability reports. He said this work would start with the 25 largest part state-owned companies working in tandem with ADEME, the French Environment and Energy Management Agency. That would likely include companies such as Aéroports de Paris, Airbus Group, Air France-KLM, Areva, EDF, Engie, PSA, Renault and Thalès.
France has been rocked by the so-called ‘gilets jaunes’ (yellow vests, named after the hi-vis vests they wear) demonstrations in recent weeks that have left two people dead, with protesters initially citing fuel price rises of up to 20%, but widening their protests to broader social inequality. Professional bodies say approximately one third of the fuel price rises are due to the carbon tariff, while the remainder are market rises.
Le Maire indicated that the government was reaching out to the protesters: “No-one should be left out in the energy transition. There can be no transition without social justice. The success of the energy transition will be in convincing the public of their alignment to it.“He talked about making the case for the shift to renewables as part of France’s economic sovereignty, pointing out that France had little influence on energy prices that were de-facto decided “in Washington or in Vienna at OPEC meetings.”
In addition, he said France would also tighten up rules on green investment for the country’s national state savings funds for sustainable development and solidarity, tax advantaged funds offered by the French postal savings banks. He said that they would now be obliged to invest exclusively in green finance, which he said he had assumed was already the case, but isn’t.
French press reports at the weekend citing a report by Oxfam and Friends of the Earth, said French banks had invested €1.85bn less in renewables in 2017 than in 2016.
Le Maire said the government would also bring together French banks, insurers and asset managers to re-engage on climate finance, and notably end the financing of coal mines and coal-fired power plants. He said they would have to report publicly every year on their related actions.
“If they don’t do this – on a trajectory that we will define together – then we will have to be more constraining regarding coal financing.”

Le Maire said France was also publicly calling on fellow EU Member States to back the introduction of the EU Action Plan on Sustainable Finance by the middle of 2019.

He said France was also working hard with member countries of the G20 ahead of next week’s Buenos Aires summit to mark the close of Argentina’s 2018 Presidency, to make serious moves forward on green finance, with an aim of pushing a standard of extra-financial reporting in all G20 countries.