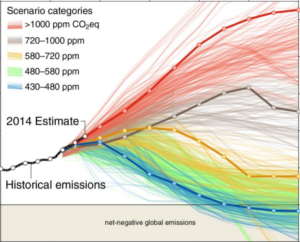 The UK’s Prudential Regulatory Authority has said it expects to bolster its existing expectations for UK banks and investors on climate risk, encouraged by a report published by the United Nations and a group of major investors today.

Major global names including Norges Bank Investment Management, Canada’s CDPQ and Aviva released the results of their work with the UN on climate scenario analysis today, warning that $10.7trn of assets under management could be wiped out by a transition to a 1.5°C economy.

Speaking at the report’s launch at Aviva’s headquarters in London – an event for which more than 400 people registered – Sarah Breeden, Executive Director of International Banks Supervision at the PRA, which is part of the Bank of England, told the audience that “over the next year or so, as tools and expertise develops, we’ll embed more granular expectations into our policy, to bring industry in line with our expectations. That will draw on reports like the one issued today”.

The BoE has already shown international leadership on the topic of climate change – leading to Kames Capital coining the term ‘Saintly Central Bankers’.

The PRA recently published formal expectations for its regulated bodies (around 1,500 banks, investment houses and other financial institutions), which include board-level management of climate risk, disclosure and a forward-looking approach.

Scenario analysis has become a major focus for responsible investors in the last two years, after it was included as a key recommendation from the TCFD (Taskforce on Climate-related Financial Disclosures).Many investors are at the first stages of developing internal scenario analysis models. Earlier this year, RI reported that Alecta – Sweden’s biggest pension fund – had developed a methodology based on carbon pricing forecasts. Denmark’s ATP detailed its progress too.

The UNEP FI group’s report, Changing Course, outlines the current methodologies available around scenario analysis and provides a guide for design. The consortium has also used and assessed a methodology based on data from Carbon Delta, a commercial climate analysis firm based in Switzerland, analysing “at least one portfolio” each and trialling different scenarios. They each looked at different additional elements that they had identified as challenges, from aggressive physical risk to the implications for entire value chains.

Examples and case studies are provided by the investors on their focus areas. NBIM and La Française, for instance, explore the potential for developing internal scenario analysis tools and risk management practices, while CDPQ looks at the how easily different sectors can pass on the costs associated with climate change to consumers.

In addition to looking at the risk of value being destroyed by the transition to a Paris-compliant economy, the investors also identified $2.1trn in “green profits” that could be generated under a scenario where strong policy was introduced. This was based on a 30,000-strong universe of companies. If governments don’t act fast enough, though, the report warns that investors could face increased value destruction, adding a further $1.2trn to the number potentially wiped off AUM.

Manulife Asset Management’s CEO, Christopher Conkey, said the new report made the move towards scenario analysis by investors more viable. “It would take many years for investors to individually experiment with scenario analysis, and for industry best practice to iteratively evolve from that. The recent IPCC report underlined that the planet doesn’t have time for that.”

CEO of M&G Prudential, John Foley, said the project would form “a crucial first step in stress-testing the resilience of our investments against one of society’s greatest challenges”.

Note: This article was amended after publication to clarify that Christopher Conkey spoke on behalf of Manulife Asset Management, not Roy Gory.