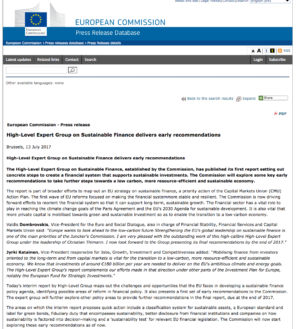 European-level principles of fiduciary duty, a label for green bonds and the creation of an EU ‘match-making’ body to help investors find green infrastructure projects are among eight recommendations made by the European Commission’s High-Level Expert Group on Sustainable Finance today.

The 20-strong group, including representatives from investors Alecta, AXA, APG, Eurosif, Deka, Aviva and Mirova, was created by the Commission last December. It has now published its interim report, a 72-page document laying out suggestions for how European policymakers and EU bodies can create a financial system that supports sustainable investing – particularly in relation climate change.

1. The creation of a classification system for sustainable assets, coordinated by the European Investment Bank
An EU classification of financial products that includes “all acceptable definitions of ‘sustainable’”, initially focused on climate change. The system should aim to help identify projects that support EU environmental policy goals, with a view to broadening into social areas in the future. The EIB is the proposed coordinator, given its lead role in the field of climate-related definitions over the past decade. The bank should work with market players, policymakers and technical specialists to create the system by the end of the year. A wider environmental approach covering biodiversity and resource scarcity, for example, could then be developed next year.
2. The creation of “official green bonds standards” and incentives for financial products
The standards, and corresponding label, would be based on the classification system above, once defined, as well as the Green Bond Principles. The Commission should help EU member states issue sovereign green bonds to spur on the wider European green bond market, and should help develop similar tools for other sustainable asset classes, including a sustainable finance label for dedicated ESG funds. It should also consider incentivising green securitisations, covered bonds, sustainable funds and other instruments (the recommendations do not specify how, but say incentives should have a time limit).
3. The creation of shared fiduciary duty principles which include sustainability considerations
“The time has come to establish a single set of principles on fiduciary duty and related concepts of loyalty and prudence,” the report states. These should be integrated into relevant laws, and promoted by regulatory authorities. Clarification should be made in upcoming reviews of legislation and regulation – such as Mifid II, PRIIPs and rules that govern credit ratings agencies – that ESG and long-term sustainability must be considered as part of fiduciary duty throughout investment and lending chains. Ultimately, the report says, ESG factors should be adopted into national definitions as a result of the Commission’s efforts, and promoted as an option at international level.
4. Heightened disclosure around sustainability
The report urges the Taskforce on Climate-related Financial Disclosure’s recommendations, released last month, to be integrated in a way that “maintains a level playing field globally” and offers legal certainty. This should include being incorporated into the Non-Financial Reporting Directive, which will be reviewed next year. Governance, strategy, risk management and metrics/targets should all be considered in disclosure, and forward-looking information such as scenario analysis should be encouraged.

5. A sustainability test in financial legislation
The report calls for the Directorate-General for Financial Stability, Financial Services and Capital Markets Union (DG Fisma) to improve its impact assessments for proposed legislation and policies. It recommends that DG Fisma takes more seriously its commitment to include “a description of the environmental, social and economic impacts and an explicit statement if any of these are not considered significant”. It also requests that the social and environmental assessments are improved by developing better tools, and that those assessments should be taken into account to ensure that “a chosen policy or legislation proposal is contributing to the SDGs”.6. The creation of a matchmaking body to stimulate green infrastructure development
A proposed ‘Sustainable Infrastructure Europe’ is being touted as an organisation that could be housed within the EIB, or function as an independent body. It will be “a dedicated advisory and match-making facility between public authorities and private investors” that would give guidance on structuring and developing sustainable infrastructure projects and finding appropriate investors to finance them. It could have regional subsidiaries, but would use pan-European expertise and connections to match investors with projects. “In addition to this function of advising and matchmaking, Sustainable Infrastructure Europe would help structure capital-raising plans in a way that would make them appealing to investors, in terms of both scale (for example, via securitisation) and risk/return profiles,” the report explains, adding that the need for greater standardisation around sustainable infra projects should also be addressed to help grow the market.
7. The positioning of European Supervisory Agencies on sustainability
The current review of European Supervisory Agency (ESA) operations should include clarification and enhancement of their role in assessing ESG-related risks in the context of long-term financial stability. Their objective could remain the same, the report says, but shared EU-level principles around ESG disclosure by pension funds, insurance companies, mutual funds, asset managers and banks and their clients should be developed to avoid disparities between member states, which could result in competitive disadvantages. The ESAs should encourage participation from experts in sustainability, too.
8. The creation of accounting standards for energy efficiency
To boost the flow of effective energy efficiency projects – much needed in order to meet EU climate goals – a better interpretation of accounting standards needs to be developed by Eurostat (another of the 33 DGs, focused on providing statistical information to EU institutions). Primarily, this requires a new approach whereby privately-financed energy efficiency initiatives undertaken by governments do not appear on public-sector balance sheets, as this discourages member states from engaging with these kind of investment programmes.

HLEG has been hailed as one of the most exciting initiatives around climate finance so far. “The Taskforce for Climate-related Financial Disclosure has taken a lot of the limelight because it’s international, but also because it has backing from Mark Carney and Michael Bloomberg, so it looks good in the headlines,” said one market observer. “But in reality, HLEG is potentially far more ground breaking because it feeds directly and explicitly into policymaking, so there is a clear next step in terms of turning the recommendations into rules.”

The EU is expected to need an additional €180bn of investment each year into climate-aligned projects in order to meet its goals. The Commission said it was committed to “act on these findings as soon as possible and by the first quarter of 2018 at the latest,” in a forward to the report, penned by Valdis Dombrovskis, Vice President for the Euro and Social Dialogue, and head of financial Stability, Financial Services and the Capital Markets Unions; and Jyrki Katainen, Vice President for Jobs, Growth, Investment and Competitiveness. “As the first priority, we need to work on changing the investment culture and behaviour of all market participants. This includes providing more financial and other incentives to choose and offer green products,” they added.

The final report from HLEG is slated for December.