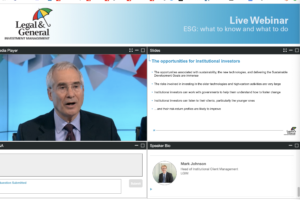 The Extinction Rebellion climate campaigners are “right to emphasise” the urgency of the climate crisis, said leading climate economist Lord Stern. The protestors have today targeted the London Stock Exchange and have led to a debate in Parliament. See our thoughts on Extinction Rebellion here.

Stern was speaking on a webinar hosted by fund management giant Legal & General Investment Management, which has itself recently warned of climate catastrophe.

“They’re right to emphasise the urgency of the story,” said Stern, Professor of Economics at the London School of Economics and Chair of the Grantham Research Institute on Climate Change and the Environment. He is known for his influential Stern Review on the economics of climate change (2005-2007).

He drew together several threads such as Bank of England Governor Mark Carney’s speech in Brussels recently, the latest warnings from the International Panel on Climate Change and BBC broadcaster David Attenborough’s recent documentary on climate change, saying that Carney is “absolutely right” to emphasise that climate change presents an “existential” threat.

But while explaining the risks, he was keen to emphasise the potential attractiveness to investors of climate change, stressing that “in the medium to long term there IS no high carbon growth path”.

“There are real opportunities here if we get it right,” he said, and he cited low interest rates and the Paris Agreement: “We have it in our hands, and the rewards are enormous.”

“Absolutely central” to this was the role of finance and Stern welcomed the recent Helsinki declaration – seeking to drive stronger collective action on climate change – by a group of finance ministers.Stern said there were “immense opportunities” for institutional investors as low carbon “is THE growth story of the future”.

As well as LGIM executives, the webinar, which was targeted at pension trustees, also featured Stuart O’Brien, a partner at law firm Sackers, who briefed the audience on new UK ESG legislation affecting pension trustees.

This was timely as, speaking in Parliament this week in a debate on climate change amid Greta Thunberg’s visit and the Extinction Rebellion protests, a government minister said pension beneficiaries should lobby their trustees on the climate issue.

“The most effective thing we can do is to think hard about our pension funds” – Claire Perry, UK Minister of State at Department for Business, Energy and Industrial Strategy.

“The most effective thing we can do is to think hard about our pension funds—either through our investments or by lobbying trustees, such as those of the House of Commons scheme—because it is 27 times more effective to get an institutional investor to make the shift,” said Claire Perry, Minister of State at Department for Business, Energy and Industrial Strategy.

“The good news is that that is happening right across the world, and amazing groups, such as the Church groups, are doing it in the UK. That is the power of market forces, and such actions will dwarf the amount of money that Government are investing in this low-carbon transition.”