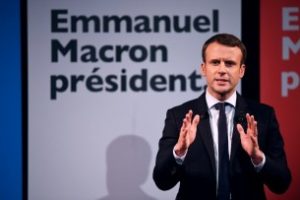 French president Emmanuel Macron looks set to complete his Gallic political revolution this weekend (Sunday June 18) in the second round of the French parliamentary (Assemblée Nationale) elections with his fledgling En Marche! (On the move) party expected to win a clear majority of seats.
And as RI has reported, Macron’s parliamentary takeover is incredibly good news for responsible investment. Less well known is that a number of French asset management/insurance figures with strong interests in RI are backing him, and could help deliver on his promises.
To recap, Macron was the only presidential candidate to reply to an open letter from the French SIF (Forum pour L’Investissement Responsable: FIR), asking for their vision on responsible and sustainable finance (obviously, a key reason for him winning so convincingly ;0)
In a highly developed responsible investment approach, Macron said he favoured a legal obligation for banks and life assurance companies to offer at least one sustainable and SRI labelled fund option when selling to clients.
As Jean-Philippe Desmartin, Head of Responsible Investment at Edmond de Rothschild Asset Management (EdRAM), notes: “A similar obligation was introduced for employee savings schemes 15 years ago and it helped increase SRI assets more than tenfold. They now represent 25% of a market with more than EUR 100bn under management and all the stakeholders are happy with the results.” The French finance industry is already rowing in behind the sustainable finance wave with the launch today (June 14) of Finance for Tomorrow, to promote Paris as a sustainable reporting/research/investment/green bonds centre in line with the COP21 and UN Sustainable Development Goals objectives, and backed by many of the country’s investor lobby groups lead by Paris Europlace, the group for promoting Paris as a financial centre.
A former Rothschild banker, Macron understands finance. And where he needs any gaps filling in on asset management, he can turn to Christian Dargnat, a founder member of En Marche! and chair of its financing association.Dargnat was Chief Executive Officer of BNP Paribas Asset Management from 2009 to 2016 and CIO of BNP Paribas Investment Partners, and regularly spoke about BNP Paribas’ backing for responsible investment at conferences. Or if Macron needs advice on climate/RI investment or divestment issues, he could ask Amélie de Montchalin, Vice President for Policy & Foresight at AXA Group.
De Montchalin looks likely to win a parliamentary seat for En Marche! this week in her home region of the Essonne just outside Paris after she took a commanding share of the vote in the first round.
At AXA, she has been a contributor to the EU High Level Expert Group on Sustainable Finance, worked on the TCFD dossier and France’s Article 173 climate reporting law, and headed AXA’s working group on divestment from coal and tobacco.
Macron’s manifesto showed he was very keen on sustainable finance. The appointment of green activist Nicolas Hulot as Minister of State for Ecology, was a bold step.
As was the new President’s stated aim of making France the world leader on the environmental transition, and his cheeky offer for forward-looking tech specialists to leave the US and head for France if they want to reject Donald Trump’s backsliding on the commitment to the COP21 Paris Accord.
But the targets are clear: serious proposed reductions in pollution, closure of remaining coal plans during the five-year presidency, no shale gas, priority to low carbon energy, tightening carbon pricing with a goal of reaching 100 €/tCO2 in 2030, doubling of wind and solar capacity by 2022, maintenance of a 32% target for renewables in the same time period, smart energy storage and networks, promotion of the circular economy, ecologically- and organically- driven agricultural policies, biodiversity protection, and a crackdown on offshore tax evasion to boot.
The programme is breathtaking in its ampleur, and merits clear scrutiny by investors. How much can, or should be achieved is debatable. But for now, the new President has ‘du vent dans ses voiles’ (wind in his sails), a financially literate head on his shoulders, the backing of the French people and support from the RI world. This is a game changer.
We wish him bon courage!