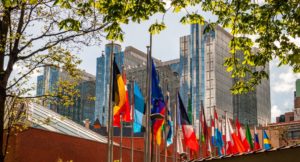 Large EU-registered investment managers are expected be required to provide detailed breakdowns of their voting behaviour at portfolio companies by the end of this year.

This will include listing the proportion of voting rights held in portfolio companies where a manager has more than 5% voting rights, thematic breakdowns of votes over the past reporting year, usage of proxy advisors and information on a manager’s voting guidelines.

The disclosure rules are set out in draft regulatory technical standards, published today by the European Banking Authority (EBA), specifying the information that investment firms will need to publicise to comply with the EU’s new prudential regime which began in June.

The final draft RTS  has been submitted to the European Commission for adoption, and the rules also need to be approved by the European Parliament and Council of member states. The first disclosure date will be 31 December 2021, the EBA said.

Under the regime, introduced by the EU Investment Firm Regulation and Directive (IFR/IFD), large investment firms are subjected to the same prudential rules as deposit-taking banks, meaning that managers will have to maintain capital buffers to cover potential losses from their activities, in addition to new governance and remuneration requirements.

This includes a ban on guaranteed bonuses, the creation of gender-balanced remuneration committees, stricter rules on variable remuneration and termination payments. Investment firms will also have to provide details of their remuneration policies and practices, including information related to the gender pay gap.

Today's draft technical standards on disclosure of investment policy were developed jointly by the EBA and the European Securities and Markets Authority. An initial draft of the standards was released for public feedback in March.

Both the IFR and IFRD, including the voting disclosure requirements, will apply to fund managers with assets of more than €100m.

Investment firms subject to the voting disclosure rules will need to report the percentages of vote cast for, against and abstentions according to seven themes which include Board Structure, Executive Remuneration, Auditors, and Environment, Social and Ethics – which is consolidated into one theme.

The rules will apply to shares held directly and indirectly – referring to “shares held by subsidiaries or any other undertakings of investment firms, where an investment firm exercises significant influence”. It does not include discretionary portfolio arrangements where clients retain voting rights and prohibit managers from voting on their behalf.

The inclusion of indirectly held shares was initially a point of contention among stakeholders over concerns that managers would not be able to influence votes in their subsidiaries. However, the EBA said: “In order to understand the full picture, a broad interpretation of the term ‘indirectly held’ was hence assessed as necessary. The term should not only include shares held by subsidiaries, but also shares held by any other undertaking where the parent investment firm exercises a decisive/dominant influence or control over the undertaking.”

“Whilst this implies some additional costs for institutions in the form of a broader scope of disclosure … the more complete information and transparency this achieves for the market is assessed to outweigh the additional costs,” it added.

Separately, UK regulator the Financial Conduct Authority will also introduce prudential and voting disclosure requirements for licensed investment firms in the wake of Brexit, and published its initial proposals for feedback in August.

The FCA approach is largely in line with the EU rules but will apply to all FCA-regulated companies, and will require slightly less detailed disclosures particularly in relation to the usage of proxy firms.

In the US, the Securities and Exchange Commission recently introduced its own proposals requiring fund managers to label and categorise voting disclosures to help investors “identify votes of interest and compare voting records”.