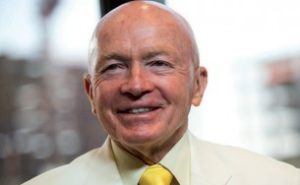 Emerging markets specialist Mark Mobius is to launch an ESG fund with a target of $1bn.
The investment veteran, who made his name at Franklin Templeton, has partnered with two other former employees of the firm, Carlos von Hardenberg and Greg Konieczny, to form London-based Mobius Capital Partners. The three said they would be equal partners.
An initial equities fund will be seeded with an undisclosed amount of capital from the three founders and “family and friends”, but Mobius said “the target has to be about $1bn, because that’s a viable size for the kind of thing we’re talking about”. The fund, to be launched around June, will be based in Luxembourg, with plans for other markets including the UK.
The fund will focus on making governance improvements at companies. “The numbers indicate that good ESG ‘marks’ mean better performance, but in order to get the environmental and social right, you’ve got to have good governance,” said Mobius.
Von Hardenberg said that although healthcare and education would be clear focuses for the fund, it was too early to identify target companies publically. There will be no explicit sector-based exclusions for the fund, but no ‘sin stocks’ would be included, he said.
However, Mobius said that while it was unlikely the fund would invest in arms or tobacco, “the cigarette industry might come up with something good, you never know”. Gaming was a possibility, he added, if it supported the trend away from traditional gambling to a culture of “entertainment centres” like Las Vegas.
Investing in coal producers that are working to reduce their emissions may also be an area of interest, he said.
When asked if he would buy into Saudi Aramco, he said: “We could, depending on how they set up the board and how they set up the company for listing. It’s a transparency issues… But the answer’s yes, if the conditions are right.”Von Hardenberg said ESG has become a term that was “used by almost everybody now” and “oftentimes abused”.
“There are a lot of funds out there that call themselves ESG-oriented funds, and all they do is look at some ESG list provided by a data provider and then pick the highest-rated stocks. This is not what I call active investing in ESG-focused companies, and it’s also not necessarily improving sustainability.”
The Mobius fund will use MSCI research to help it identify stocks that perform poorly on ESG and where there is little perceived potential for improvement via engagement.
Beyond that, von Hardenberg said the worst-performing companies on ESG would “probably” be a focus, as they have potential for the greatest upside if improvements were made. ““But I wouldn’t be too extreme on this,” he added.
He said that, on engagement, “Mark’s name is helping big time, because he’s well recognised in emerging markets”.
Mobius Capital Partners will report on which companies they invest in, what they are trying to achieve through engagement, and what progress they make, he said.
UBS will run the back office of the fund, and fee structures are not yet disclosed, but will have a performance-related element to them. “And the fee will certainly not be in line with ETFs,” said Mobius., pointing out that “the fee structures of these funds runs anywhere between 60 basis points to 150 basis points”.
The company is in the process of hiring nine initial portfolio managers – none of whom will come from Franklin Templeton, they said. When asked, von Hardenberg said all nine would have specialisms in social and environmental investing, with “one specific” hire with a particular expertise in the area.