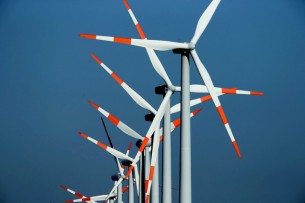 The mandate of the UK’s Green Investment Bank (GIB) is clear: to help bring new investors and capital into the country’s green economy. As the state-owned but independent bank enters its third year – it was set up in October 2012 – it can point to a raft of achievements in that direction and, by and large, the support of much of the UK’s low-carbon business and finance communities.

But one crucial constituency has, thus far, not shown up: the pension funds and insurance companies who are sitting on the capital needed by the UK’s electricity sector to meet the country’s climate change targets – estimated by the UK government at £100bn (€125bn) by 2020.

“It’s a fair comment,” says Ed Northam, head of investment banking at the GIB, when asked about their absence to date. “But it’s largely to do with familiarity with the asset. These groups don’t look to make the first investment in a sector – they probably don’t look to make the second … They want to see it working before they develop the confidence that this is an area they can participate in.”

A handful of the bigger funds, which have developed the in-house capability to invest in infrastructure, have dipped their toes into UK renewables, and especially the offshore wind farms where much of the finance will be needed this decade. In January, Canadian giant the Caisse de dépôt et placement du Québec spent $1 billion on a quarter stake in the 630MW London Array offshore wind farm, while in 2010 Dutch pension scheme manager PGGM became an early investor in the 367MW Walney offshore wind farm.

But it’s the smaller funds, which would make infrastructure investments through external managers, which comprise the GIB’s natural constituency. “We’ve been keeping them up to speed with what we’re doing,” says Northam, “and they’re the people we’re actively engaging with around the offshore wind fund.”

In June, GIB chief executive Shaun Kingsbury announced that the bank is looking to raise a £1 billion fund to take unleveraged equity stakes in operating offshore wind farms. Northam says that the fund is on course for a first close by the end of the year, at possibly 40-50% of that target.

“It would be a positive development if the GIB could widen the institutional landscape and bring UK pension funds and other institutional investors into the offshore market,” says Dennis van Alphen, an investment director in the infrastructure team at PGGM, the Dutch pensions giant which manages €167bn.

In 2012, the GIB was part of a consortium of banks that refinanced the Walney project, providing £224m of debt that enabled the refinancing of a bridge loan provided by Danish utility DONG Energy, which owns 50.1% of the project.“There’s a lot of asset rotation by utilities currently,” van Alphen notes, as they seek to sell, or partially sell, offshore wind farms once they are operational. This is creating considerable demand for capital, with the GIB estimating that UK offshore wind represents a £50bn-60bn market.

“We’re not keen on construction risk in offshore wind,” says van Alpern. “If GIB was willing to take construction risk, and sell it on to someone else when the project has been de-risked, that would be a positive.”

The GIB has started providing finance to construction-stage wind farms, making its first such investment, in the Westermost Rough offshore farm, in March alongside Japanese trading house Marubeni Corporation. The plan is to then bring pension fund, insurance company and sovereign wealth fund investors into refinancing projects, via the fund, once they are safely up and running, says Northam. “If we’re introducing a new class of investor into the offshore wind space … we want to take them down to the lower-risk end of the spectrum. That’s how we’ll get them in.”

The fund’s investments will be in operating and therefore revenue-generating wind farms without leverage. That ensures that investors “get access to 100% of the cashflows, so we don’t rank behind anyone,” says Northam. “That’s clearly a lower-risk position.” It will buy and hold assets for their 20 year-plus lifespans, generating a target internal rate of return (IRR) of 8.5-9% before fees.

The high, ‘private equity-style’ fees that infrastructure managers have tended to charge have been raised by pension funds as a disincentive to invest in the asset class. Northam says that he would expect the GIB to charge a fee of 1-1.2%, as part of all-in costs in the 2-2.5% range. “Across the market, management fees are under pressure,” he adds. “As we get deep into negotiations … that will be a negotiation, undoubtedly.”

The GIB is particularly targeting UK-based pension funds – such as RPMI Railpen, the £20bn (€24bn) body which manages the UK’s railway industry pension funds, and which has made a number of infrastructure investments, focusing on social infrastructure such as hospitals, schools and government accommodation.

Richard Moon, investment manager and head of private markets at Railpen, says the fund is starting to look at green infrastructure, such as renewables, adding that it is talking to the GIB about its offshore fund. “It’s under consideration alongside a number of renewable energy opportunities … We’ll make a judgment as what is most attractive on a relative value basis,” he adds.

That the GIB fund is being evaluated against other investment vehicles raises the spectre of ‘crowding out’ – that the GIB risks displacing private sector activity.
And, as one UK-based renewable energy fund manager notes, “there is a finite pool of [asset owner] money going into alternatives and into renewables – with the offshore fund, the GIB will be eating into that allocation. There probably will be competition for some investors.” However, the manager also notes that the GIB’s links with government means it is likely to have more success with sovereign wealth funds than a private sector manager might have.

Across its investments to date, GIB has worked hard to show that, rather than crowd out other willing investors, its involvement has instead been necessary to get projects or transactions over the line. And by focusing its first fund on offshore wind, it is intervening where other fund managers have yet to tread.

“We don’t see it as a competitor at the moment,” says Ian Simm, chief executive of Impax Asset Management, a London-based specialist environmental investment manager which runs two private equity infrastructure funds. “Currently, our investors are more attracted to onshore wind, which has a long track record, than to the offshore sector. There are probably other investment managers who are willing to take a bit more risk and who might argue that the GIB has the potential to become a competitor.”

Moon at Railpen argues that “the GIB has extensive experience in funding the construction of offshore wind. In the short term, I’d struggle to see other fund managers making it their sole strategy to compete with the GIB on the purchase of operational offshore wind assets. As the market matures, though, more investment products targeting the strategy will develop, creating more choice for investors.”

And Moon also reassures potential competitors by stressing that the unique characteristics of the GIB – namely its ownership by the UK government – don’t confer any advantages when it comes to evaluating the investment opportunity. “We’ll look at this in the same way as we’d assess any third party fund manager. The fact that it’s related to government may provide it with some perceived advantages, but our due diligence will be exactly the same.”

That the GIB is owned by government may reassure investors concerned about policy support for clean energy. And, says Northam, “regulatory risk is item one, two and three,” in terms of issues raised by investors. He notes that some prospective fund participants have seen losses on renewable energy investors in Spain and Italy, where governments have reneged on the subsidy regimes governing existing assets.

Investors are also seeking reassurance around the risk that wind turbines will not perform as advertised in harsh offshore conditions. “They are often surprised to hear that the oldest offshore wind farm has been operating for 22 years – and it’s operating at 99.5% of design capacity … You take people through that history, and it’s undoubtedly an eye-opener.”
A third area of concern is around the project pipeline. Northam says that GIB as not as bullish as some analysts who are forecasting up to 22GW of offshore wind farms.“We’re realistic. We don’t think there’s budget for that. We’re of the view that will be 10-12GW of offshore over the next 15 years.

However, for all the sums required to fund the UK’s green infrastructure, it’s not clear that, right now, a lack of finance is the problem, says Donald MacDonald, a trustee of the BT Pension Scheme, and chairman of the Institutional Investors Group on Climate Change (IIGCC).

“There’s probably more money chasing projects than there are [investible] projects at the moment,” he believes. “The large British, Danish and Dutch schemes are all looking for infrastructure projects in the UK and Europe, as are the Canadians – there’s a lot of heavy-duty capital looking for projects.

“The fact of the matter is that we need strong policy signals from the EU Commission and the UK government.”

Northam agrees that, right now, “we’re not capital constrained”. The GIB was funded to the tune of £3bn for its first three years, with an extra £800m pledged in 2013 to cover its fourth year. Thus far, it has committed £1.4bn – arguably less than might have been expected by this point.

Northam points out that the original £3bn was a somewhat arbitrary figure, and investment in the sector as a whole has been slowed by the government’s Electricity Market Reform programme, which has introduced a new subsidy regime for renewable energy projects.

He also notes that, in the sectors in which the GIB is mandated to invest, “we’re 50-60% of the market. When I started this job, I’d have said 20-30% max. I’d argue that we’ve been phenomenally successful.”

Ingrid Holmes, an associate director at non-profit think-tank E3G, says that the GIB’s relatively slow start is understandable, given the work involved in establishing a new institution from the ground up, its focus on immature sectors, and the broader policy changes which have slowed investment in the country’s power sector.

Northam argues that the GIB can point to a number of examples of financial innovation in its first two years. He cites its backing for Greencoat, the first ‘yield co’ offering investors listed exposure to renewable energy assets, its structured loan that allowed the city of Glasgow to fund an LED street-lighting programme out of future energy savings, and first-of-its-kind waste-to-energy projects.

But what the GIB, and the wider renewable energy community, most needs to demonstrate are successful investments, he concludes. “The market is desperately short of success stories. How do you get deep pools of capital into this sector? The answer is you show them successful investments, and you build their confidence that that they are going to make sensible, attractive risk-adjusted returns. “And that’s fundamentally what we’re on the path to demonstrating – that you can be green and profitable.”