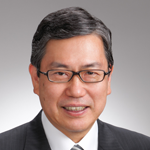 CANDIDATE STATEMENT
I was truly honoured to be nominated by the PRI board as a candidate to be a board member and to be elected at the mid-term election. My term has just started at the end of June, but I would like to stand in the 2015 annual election and contribute continuously to the three-year term starting January 2016.
Although Asian countries, and Japan in particular, have lagged behind other regions with regard to ESG integration, Japanese asset owners and asset managers have recently started to give serious consideration to ESG integration, accelerated by the introduction of the Japanese Stewardship Code in 2015.
I believe my extensive experience in responsible investment over ten years, along with my background as a mainstream investor for more than 20 years, could contribute to expand the PRI initiative in Asia in this crucial time of transition.
My own commitment to responsible investment started in the early 2000s, when Daiwa Asset Management launched governance funds and green funds, and I played an important role as the executive officer of investment working in the restructuring of Daiwa’s fund management processes. In 2006, Daiwa became a founding signatory of the PRI following my advice as CIO.
Japan Sustainable Investment Fund (JSIF), for which I act as the Chairman, is a Network Supporter of the PRI and works closely with the PRI Japan Network to advocate ESG integration to mainstream investors. JSIF and the PRI Japan Network co-hosted a conference on ESG investment by Japanese pension funds in 2013, and the annual conference on the Japanese Stewardship Code in 2014. JSIF also works with ASrIA – the Hong Kong Based SIF – which covers other Asian countries.
I have been a member of the FTSE4Good/FTSE ESG Advisory Committee for the last ten years as the only member from an Asian country and have contributed to developing criteria suitable for both West and East. I also became an initial member of the CDP Japan Advisory Group in 2009. I have extensive professional experience in Asia and in the Middle East besides the experience of working together with leading financial institutions and fund management firms in China, Singapore, Malaysia, India, Brazil, UK, Spain, Italy and Germany. Thanks to this track record, I am frequently appointed to be a member of committees established by the Ministry of the Environment and Ministry of Economy, Trade and Industry in Japan. With your support, I am committed to the further expansion of responsible investment and ESG integration in both Japan and other Asian countries.BIOGRAPHY