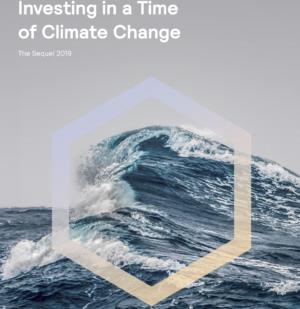 Consulting firm Mercer has released the third in a series of major institutional investment and climate change reports and found that there are investment opportunities in what it describes as the ‘low-carbon transition’ (LCT) premium.

The series dates back to 2011, when it was called ‘Climate Change Scenarios: Implications for Strategic Asset Allocation’.

This was backed by 14 major global investors and advocated a massive institutional shift to climate sensitive assets (RI coverage).

The first report – which recommended that institutional investors shift up to 40% of their assets into “climate sensitive” assets — did much to set the scene for climate investment.

It was updated in 2015 as Investing in a Time of Climate Change (RI coverage) and today’s 96-page report is the sequel to the second report.

The new version says transition opportunities emerge from a 2⁰C scenario, with transition now expected to be a benefit from a macroeconomic perspective, including the potential to capture a “low-carbon transition (LCT) premium”.

The project was led by Mercer’s Jillian Reid (Principal – Responsible Investment) and had input from the British Telecom Pension Scheme, the Church Commissioners and Church of England Pensions Board, the Environment Agency Pension Fund, the IFC, Skandia and Victorian Funds Management Corporation.

“Although a 2⁰C scenario definitely still presents transition risk (especially for portfolios aligned to a 3⁰C or 4⁰C+ world), opportunistic investors can target investment in the many mitigation and adaptation solutions required for a transformative transition. In the two sample portfolios, the sustainability-themed version is nearly 0.20% p.a. better off to 2030.”

The new report models three climate change scenarios, a 2⁰C, 3⁰C and 4⁰C average warming increase on pre-industrial levels, over three timeframes — 2030, 2050 and 2100. For each scenario, Mercer assesses the relative asset class and industry sector sensitivities to climate risk factors over this timeframe.

The results emphasize the physical damages risks and why a below 2⁰C scenario is most beneficial, and the 4⁰C and 3⁰C scenarios are to be avoided, from a long-term investor perspective.Mercer warns that, in reality, “sudden changes in return impacts are more likely than neat, annual averages” — so stress testing is an important tool.

Although the modelling results have evolved from the 2015 report, the headline messages remain consistent, the firm says, and they “reinforce the recommendations made at that time and support greater urgency for action to achieve a well-below 2⁰C scenario”.

Mercer says the new report provides investors with a “clear framework and tools” to supporting the transition to a 2⁰C scenario — as what are dubbed “Future Makers.”

“A key conclusion is that investing for a 2°C scenario is both an imperative and an opportunity,” said Helga Birgden, Global Business Leader, Responsible Investment.

“It’s an imperative, since for nearly all asset classes, regions and timeframes, a 2°C scenario leads to enhanced projected returns versus 3°C or 4°C and therefore a better outcome for investors. It’s an opportunity, since although incumbent industries can suffer losses in a 2°C scenario, there are many notable investment opportunities enabled in a low-carbon transition.”

Mercer has already advised a number of ‘first mover’ clients with the updated model in Australia, Europe and the UK and applied the new model to “key diversified portfolios” for some of its Delegated Solutions, outsourced fund management, offerings.

Mercer says that since the 2015, there has been a “meaningful shift” in investor action on climate change, often fueled by a heightened understanding of what a 2⁰C —or warmer — scenario could mean for them over both the short and long term. It says there have been more than 50 investor initiatives established seeking to compel and support investor activity on climate change.

It adds that, as a firm, it is “increasingly helping to place billions rather than millions in sustainability-themed assets, through searches for advisory clients and its own delegated solutions.

The 2015 report used the WITCH model together with the International Energy Agency 2⁰C Scenario metrics.

But, for the new report, Mercer worked with Cambridge Econometrics and their E3ME model.