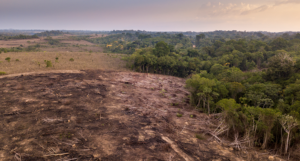 Some of the world’s largest financial institutions including Vanguard, Legal and General Investment Management (LGIM) and Baillie Gifford are not sufficiently managing deforestation risk in commodities, according to a new report from Global Canopy.

The report assesses financial companies’ policies and commitments across four commodities with a significant deforestation risk: timber, soy, palm oil and cattle. Companies are then given a rating out of five.

The highest score achieved by a company is three out of five, with eight firms including BNP Paribas, Deutsche Bank and Rabobank topping the list. Some of the world’s largest investors sit at the other end of the scale, with BlackRock, Baillie Gifford and LGIM receiving a score of one out of five and Vanguard a score of zero.

BlackRock, LGIM and Baillie Gifford had not responded to requests for comment at the time of publication.

A spokesperson for Vanguard said: “On behalf of the Vanguard funds and its investors, our Investment Stewardship team regularly engages with executives and boards, including holding discussions with relevant companies on deforestation and its risks to long-term business sustainability. If a company does not make progress towards addressing such risks, we will hold them accountable to protect long-term value for our investors”. Vanguard is also a signatory to the CDP Forest programme, the spokesperson said.

At COP26 in November more than 100 countries covering around 85% of the world’s forests signed a pledge to end deforestation by 2030. In a separate announcement, a group of 30 investors managing $8.7trn committed to eliminate agricultural commodity-driven deforestation in their portfolios by 2025, but only four of these are included in Global Canopy’s list of most influential financial institutions in the sector.

Global Canopy also looked at how investors with deforestation policies work to implement them.

Some 46 financial institutions had a clear public process to identify companies in their portfolio that do not comply with their deforestation policy for at least one of the commodities – palm oil being the most common.

On engagement, 31 institutions had a process to engage clients or portfolio companies which didn’t comply with their deforestation policies, with 17 of these including a time-bound threat of divestment in the event of non-compliance. Only HSBC, Rabobank, Nordea, Standard Chartered and United Overseas Bank have this in place for all four commodities.

Reporting was identified as a weak area, with just 23 institutions that have a deforestation policy publicly reporting on it. Only Deutsche Bank’s reporting covered Global Canopy’s key markers across all four commodities.

On human rights, just over a quarter of institutions have a policy on free, prior and informed consent – which relates to the operation of companies on indigenous lands. Only 13 had a policy on gender equality and six on land conflicts.

Institutions also performed poorly on recognising deforestation as a business risk – just six recognised it as a material risk, with nine acknowledging it as a reputational risk.