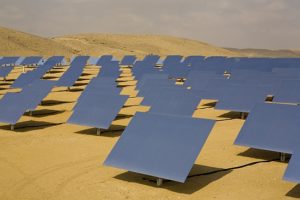 German finance giants Munich Re and Deutsche Bank have both come out in support of the troubled Desertec project, the ambitious €400bn Sahara solar photovoltaic project that has been hit by a managerial dispute and the departure of its signature partner.

It follows the announcement this week that the Desertec foundation has severed its ties with the DII consortium, the project’s developer, which it helped to set up with Munich Re.

The foundation said: “We, the main idea- and name-giver for the Desertec concept, are taking this step as a result of many irresolvable disputes between us and DII in the area of future strategies, obligations and their communication, but not least the managerial style of DII’s top management.” For its part, DII said it has “no impact on DII’s goals, strategy or activities” and that it would continue to work to create a market for desert power.

Van Son, a 60-year-old energy executive with more than 30 years of experience, was named DII’s managing director in 2009. But in early 2012, DII’s backers appointed Wieland, a 38-year-old former principal at the Boston Consulting Group, as co-MD to “ease the managerial burden” on van Son.

DII’s role is not to build the solar parks in the Sahara, but to provide feasibility studies as well as investment and financing guidance. Beyond Munich Re, DII’s backers are German energy giants RWE and Eon, as well as UniCredit, Deutsche and HSH Nordbank.Two of Germany’s leading industrial and technology firms, Siemens and Bosch, quit Desertec in November last year.

Asked whether they still had faith in Desertec, DII backers Munich Re and Deutsche Bank gave a firm yes. Despite the managerial dispute, a spokesman for the re-insurer said: “As regards to the content of the work at DII, we’re pleased.”

“We remain committed and continue to believe that it is feasible”

A Deutsche spokesman added: “We remain committed to Desertec and continue to believe that it is feasible.” In May, the first step to realising Desertec was taken when construction of a 500MW solar power plant began.

According to the German media, the van Son-Wieland dispute centres on whether or not to postpone plans to deliver whatever electricity is generated in the Sahara to Europe. A DII spokesman said the initiative’s 19 backers would now meet as soon as possible to resolve the managerial dispute.

Desertec is set to be fully realised in 2050. But reaching that goal will be difficult due to the amount of investment needed and logistical challenges. Munich Re has estimated that the project will cost at least €400bn.

Even if that sum of money can be raised, other hurdles stand in the way. Among them are ensuring delivery of the power to Europe through an often politically unstable northern Africa and getting European power companies to cooperate in the effort.