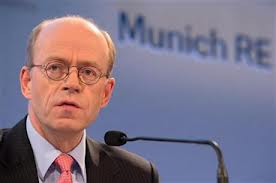 Despite a new study suggesting that half of the onshore wind parks in Germany are unprofitable, Nikolaus von Bomhard, chief executive of Munich Re, one of Europe’s biggest renewable investors, is still backing onshore wind power.

“Even if the number 50% is correct, we as an investor can live with that, as it just means that one has to do more thorough due diligence,” von Bomhard told journalists at a news conference in Munich this week. “That means one has to be certain that the feed-in tariffs are guaranteed; one must know how the park is being serviced; and of course one has to have reliable wind projections.”

He added: “We in any case have only a small allocation to onshore German wind and instead have chosen to invest far more heavily in wind parks in Scandinavia and the UK.”

Under its Renewable Energies and New Technologies (RENT) programme, Munich Re is investing a total of €2.5bn in wind and solar power infrastructure across Europe. Including the acquisition of three UK wind parks a year ago, the company has allocated one-fourth of the dedicated volume. Von Bomhard said all of Munich Re’s wind parks were profitable.His comments come in the wake of a controversial study on the profitability of German onshore wind parks, commissioned by German wind power association BWE.

It found that half of the 175 facilities examined “are running so poorly that investors can be happy if they get their money back after 20 years.” The main reason was a lack of wind.

BWE has played down the study, noting that as the parks scrutinised represented just 5% of all onshore facilities in Germany, it was not representative. But the BWE also admitted that wind projections made in the late 1990s for the parks were overblown.

Munich Re management board member Torsten Jeworrek also reaffirmed the firm’s commitment to Desertec, the massive Sahara solar project that last month lost its signature partner due to infighting.

However, he also acknowledged that cooperation among European energy firms to get the power generated in the Sahara to Europe was a problem.

Beyond this logistical challenge, Munich Re and the initiative’s other backers need to find at least €400bn in investment to realise Desertec by the target year of 2050.