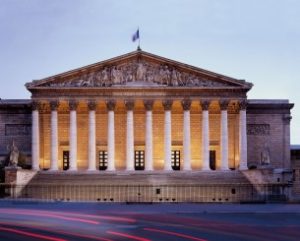 Story update: The law was adopted by 308 votes in favour, 217 against.

The French National Assembly will today vote on and likely adopt one of the most far-reaching regulatory requirements in the world for institutional investors to report information on how they integrate ESG into their investment processes, report on the GHG emissions of their assets and contribute to the financing of a low carbon economy. The ESG integration and reporting rules were added as amendments under Article 48 to a comprehensive new French law on the green energy transition that the country is introducing: le projet de loi relatif à la transition énergétique pour la croissance verte (French only): Link
Today’s vote is expected to be a formality as the French government has officially supported the amendments. RI reported on May 22 that Michel Sapin, the French Minister of Finance and Public Accounts, had announced at last week’s Climate Finance Day that the data should be published as part of the investment policy by French financial services companies: Link
The Paris-based climate think-tank, the 2° Investing Initiative, said the amendments may still evolve as the law needs to be ratified by the French Senate.
The text says institutional investors in France (insurance companies, public institutions, public pension funds) will have to report on the investment risks posed by climate change, including the GHG emissions associated with the assets they own. They will also have to report on their contribution to the international goal of limiting climate change, and to the realisation of the new green energy transition law.The 2° Investing Initiative said the proposed law says investors will be measured against internally produced indicative targets based on the nature of their activities and investments consistent with the national low-carbon strategy. If targets are not met, investors will have to explain why.
Under the same rules, listed companies will have to disclose in their annual report any financial risks related to the effects of climate change, including the use of goods and services produced. It implies that companies will have to report on Scope 3 CO2 emissions. This stretches existing French law, which already obliges companies to report on their social and environmental impact. Under the new rules, companies will also have to report measures adopted to reduce climate change risks via low-carbon business strategies.
The French government will also submit a report to Parliament by the end of 2016 looking at stress-test scenarios for banks and lenders on the risks associated with climate change.
The French energy transition law has multiple implications for investors. Its broad aim is to reduce greenhouse gases by 40% from 1990 levels by 2030. Energy consumption targets also lay out a 50% reduction from 2012 levels by 2050, notably in transportation and buildings. The legislation also proposes that France raises renewable energy to 23% of total use by 2020 and 32% by 2030.