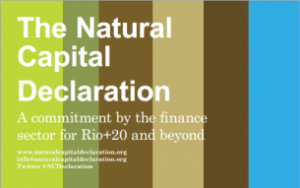 The idea of valuing natural capital has taken a step forward with two separate consortia being named to develop what is hoped will become the ‘Natural Capital Protocol’ by a high-level body promoting the concept.

The Natural Capital Coalition was established in 2011 as the TEEB for Business Coalition and is backed by a range of groups such as the Institute of Chartered Accountants in England and Wales (ICAEW), the Prince of Wales’ Accounting for Sustainability Project, the International Union for Conservation of Nature (IUCN), the World Business Council for Sustainable Development (WBCSD), WWF, the Global Reporting Initiative and the World Bank’s IFC. It’s funded by the Gordon and Betty Moore Foundation and the IFC.

Now the coalition has said the two groups developing the guidance would be headed by the WBCSD and the IUCN. The plan is for the first version of the Protocol to be presented by December 2015.

It’s hoped the protocol will provide a methodology for businesses globally “to understand the impacts that they have and the extent to which they are dependent on the natural environment, its finite natural resources andfunctioning ecosystems”. The proponents see it as “a major game-changer”.

The WBCSD group will “bring together the various methodologies, systems and ideas currently in the market” into what is being called a “single harmonised measurement and valuation framework”. Among the group’s members are Accenture, the Climate Disclosure Standard Board, Conservation International, Deloitte, Imperial College, PwC, the Nature Conservancy and WWF US.

The IUCN group will translate the protocol into two sector specific guides (food & beverages and apparel). It will also manage a central hub to test the protocol with companies. Membership of this group includes the likes of Ernst and Young, Trucost, the University of Cambridge Institute of Sustainability Leadership (CISL) and the United Nations’ Food and Agriculture Organisation (FAO).

“The Natural Capital Protocol will be an open source, global multi-stakeholder framework for understanding, measuring and valuing the impacts and dependencies on the natural environment,” the body says.

In April it was announced that the coalition’s CEO Dorothy Maxwell would step down, to be succeeded by Pieter van der Gaag as interim Executive Director. He has experience with NGOs, Triodos Investment and the GRI.