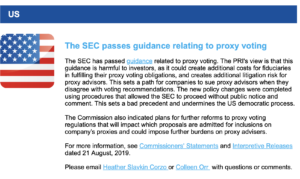 The new guidance on proxy voting in the US is not just harmful for investors but undermines the country’s democratic process, according to the Principles for Responsible Investment (PRI).

The body was responding to the update from the Securities and Exchange Commission (SEC) last month, saying it is “harmful to investors” as it could create additional costs for fiduciaries in fulfilling their proxy voting obligations. It also creates additional litigation risk for proxy advisors, the body says.

In a policy briefing sent to signatories, the UN-backed initiative says: “This sets a path for companies to sue proxy advisors when they disagree with voting recommendations.”

It goes on: “The new policy changes were completed using procedures that allowed the SEC to proceed without public notice and comment. This sets a bad precedent and undermines the US democratic process.”

SEC Commissioner Robert Jackson, who along with his colleague Allison Herren Lee dissented on the guidance, is speaking at the PRI’s inaugural sustainable finance policy conference in Paris next week.

The PRI’s US policy work is headed by Heather Slavkin Corzo. She is also a senior fellow at Americans for Financial Reform and director of capital markets policy at the AFL–CIO, the US union body.She wrote a blog which covered the proxy voting issue issue in May.

The PRI was part of a group of professors and institutional investors that submitted a petition to the SEC last October urging it to develop a comprehensive framework requiring issuers to disclose identified ESG aspects of each public-reporting company’s operations.

“This sets a bad precedent and undermines the US democratic process.”

This activity comes as another US asset owner, the Los Angeles City Employees’ Retirement System (LACERS), has today appeared on the PRI’s signatory register, along with the Hong Kong Monetary Authority (HKMA), the crisis-torn territory’s de facto central bank.

Responsible Investor first reported the HKMA was in the process of signing up to the PRI – and that it was also considering membership of the high-level Network for Greening the Financial System (NGFS) – earlier this year.