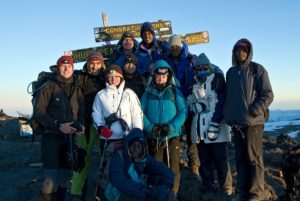 New Ways, a charity with strong links to the pensions and investment community, is looking for volunteers for a sponsored trek up Mount Kilimanjaro, the highest point in Africa at 5,895 metres and one of the world’s seven continental summits.
The trek is planned for late September/early October and participants need to raise around £4,000 in sponsorship. In return, based on the experiences of the participants from City firms such as Axa Rosenberg, JP Morgan, BlueCrest Capital and Man Investments on last year’s trek, they can expect one of the most amazing weeks of their lives.
Lucy Johnstone, who works in institutional sales for Man Investments, described last year’s trip as an absolute blast and added: “Giving up your time for something like this is a huge contribution for people to make but we all really enjoyed the trek. We all managed to cope with the altitude and made it to the top but you had to dig deep at times, particularly on the final climb to the summit.”
As a charity, New Ways has been has been working to support health, education, water and agriculturaldevelopment projects in Africa and South America since 1994. Its focus is on projects that are sustainable and provide a basis for the long term development of a community or region, mostly in areas that are particularly remote or deprived. It also keeps costs to a minimum by using a network of volunteers, many of whom work in pensions and investments.