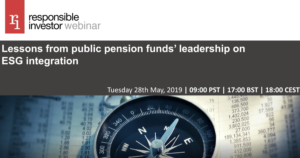 The New York City pension funds under City Comptroller Scott Stringer are prepared to take to the courts again to ensure that climate resolutions get onto companies’ proxy statements – building on the unusual tactic they employed at aerospace firm Transdigm.

Budhai, who was speaking yesterday on a webinar organised by Responsible Investor, said “the New York City funds will continue to file the [greenhouse gas emissions targets] proposal, we are not averse to going to court again as we did with TransDigm”.

She was referring to the $195bn funds’ lawsuit against the US aerospace firm earlier this year.

TransDigm had sought a ‘no action’ letter on the resolution from the Securities Exchange Commission. But before the SEC even ruled on the case, the funds took the company to court. In response to the litigation, Budhai told RI, the company settled out of court by withdrawing its SEC challenge.

It meant the resolution could be voted on by investors; it got 34.9% support at the Transdigm AGM in March.

It was a development that was seen as potentially signalling a new strategy that, in effect, bypasses parts of the SEC’s process.

Also, speaking on the webinar – Lessons from US public pension funds’ leadership on ESG integration – was the Treasurer for the State of Oregon, Tobias Read.

Read, who is responsible for the $73bn Oregon Public Employees Retirement Fund (OPERF), one of the largest public pension pots in the US, said investors have gained a voice.

“It wasn’t very long ago that shareholders were expected to act like the children of yesteryear, to be seen and not heard, don’t make any noise, just enjoy your piece of the profits and look the other way, that doesn’t fly anymore”.

He called for a greater “attention to social factors”, stating that investors and risk managers had been more focused on environmental and governance issues to date, “driven largely by the development by empirical data”.“It is true that not every social risk can be captured in math”, Read said, “but we know it is not zero and we know that bottom line will suffer if companies are not doing the right thing”.

“It wasn’t very long ago that shareholders were expected to be seen and not heard” — Tobias Read.

Rice spoke about the State’s frustrating engagement with under-fire US student debt collection firm Navient, which Rice said is being sued by the “federal government, innumerable states and shareholders” over its practices.

Despite over 40% of shareholders supporting the state’s 2018 resolution at the Delaware-based firm and the company meeting with Rhode Island’s staff in November to hear their concerns, Rice told RI that “Navient couldn’t find a single place where they needed to improve their servicing”.

As a result, Rhode Island is now pursuing a legislative tack to protect the state’s students from “predatory and deceptive practices” by proposing in 2019 a “Student Bill of Rights”.

Budhai also shared New York City’s engagement issues with Ford and General Motors on their climate lobbying activities, particularly in relation to the weakening of the Corporate Average Fuel Economy (CAFE) standards in the US.

New York City leads on the motor giants as part of Climate Action 100+, the investor engagement initiative backed by more than 300 investors.

Budhai said that there had not been much progress and that Ford has not engaged with the fund at all.

This month, New York City’s lobbying resolution at Ford was supported by 38.7% of ‘outside’ shareholders – meaning those not from the company – at the company’s annual meeting. Its resolution at General Motors will go to the vote on June 4.