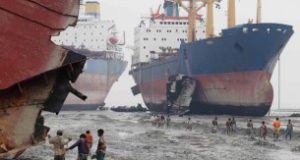 The Norwegian Government Pension Fund Global (NGPFG), which runs more than a trillion dollars, has banned four ship-owning companies – Thoresen Thai Agencies PCL, Korea Line Corp, Precious Shipping PCL and Evergreen Marine Corp Taiwan Ltd. – from its investment portfolio and placed one company, Pan Ocean Co Ltd. on watch, in response to what it says are serious human rights violations and environmental pollution caused by the so-called ‘beaching’ of decommissioned vessels in Bangladesh, India and Pakistan to be broken up for scrap metal.
NGPFG, one of the world’s biggest sovereign wealth funds, based its decision on recommendations from its Council on Ethics, which consists of legal experts that analyse its investment holdings on controversial issues. Boycott decisions by NPGFG are often used as a proxy for blacklisting companies by other institutional investors. Norges Bank Investment Management (NBIM), the country’s treasury finance body, which manages the NPGFG assets, has sold the shares in the four excluded companies.
The practice of ‘beaching’ affects almost 80% of the 1000+ ships that are scrapped for metals, notably steel, each year, many in South Asia, but also in China and Turkey. The ships are driven onto beaches and broken up, often by migrant workers. NGPFG alleges that this takes place in extremely poor conditions with lax safety and health standards, and sometimes the use of child labour. It also cited related environmental pollution and breaches of international hazardous waste management laws, where there are strict requirements for its movement and disposal.The Council on Ethics said NGPFG’s investment in the shipping companies breached rules 3a and 3c of its ethical guidelines, which state that companies “may be put under observation or be excluded if there is an unacceptable risk that the company contributes to or is responsible for a) serious or systematic human rights violations, […] c) severe environmental damage.”
More than 80% of the world’s traded goods are transported by cargo ship, meaning that there are a huge number of large commercial vessels, that along with oil and gas tankers, cruise ships and ferries are scrapped each year after an average lifespan of some 30 years.
The Norwegian Council on Ethics said it had contacted a number of other, un-named, ship-owning companies in connection with its assessment. It said several had told them they would no longer dispose of decommissioned ships through beaching. As a result, the Council had decided not to exclude the companies.

Separately, NGPFG has renewed the contract of Reprisk, the Zurich-based corporate risk research firm, and hired ISS-Ethix, the ESG research firm based in Stockholm, to work on the database, monitoring and screening of companies across the 9,500 companies globally that it holds in equities and fixed-income instruments.
ISS-Ethix has been hired to replace Sustainalytics, which had previously picked up the ESG research mandate at NGPFG in 2013. The contracts are set for a term of four years.