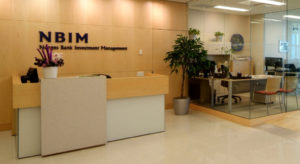 The manager of Norway’s Government Pension Fund Global (GPFG) has around $12bn (98.9 Kr) invested in 90 companies under its dedicated environmental mandates, which are managed in-house. Since inception in 2010, the annualised return on these equity investments has been 9.5%.

US electric car manufacturer Tesla is among NBIM’s top 10 holdings in the clean energy and efficiency technology segment of the fund’s environmental portfolio, with a $353m stake.

NBIM reported that since 2012, its “risk-based” divestments of companies over climate change and human rights have increased its “cumulative return by 0.27 and 0.10 percentage point respectively”.

Last year, the fund divested 32 companies based on ESG assessments, including AGL Energy Anglo American, Glencore, RWE and Sasol because of their coal exposure.

The publication of the NBIM’s annual RI report comes a day after it published a letter it sent to Norway’s Ministry of Finance last week on the issue of tax and transparency, in which the fund highlighted the need for better corporate tax reporting standards.

Earlier this year, NBIM announced that it had dumped seven companies over their tax policies – a first for the fund. It’s CEO, Nicolai Tangen said that the decision to exit the companies was due to “aggressive tax planning and cases where companies do not give information of where, and how, they pay tax”. He declined to reveal which companies were affected by the exercise.

In the letter to the Ministry, NBIM reveals that it has also developed a “database of tax information” off the back of its tax work. “We are also working with other methods to assess tax risks, and tax risks are included in our annual process for portfolio assessments against our expectation documents”, it said.

Further details on its tax efforts were provided in the report, including that NBIM had engaged with 15 companies over the year on developing and publishing policies on how they handle tax risks. US oil giant Chevron, French financial group BNP Paribas and German chemicals giant BASF are named in the report as companies that have now published policies on tax.

Several “incident-based” dialogues are also highlighted in the report by NBIM, including with miner Rio Tinto over its destruction of the Juukan Gorge in Australia and with the State Bank of India over its potential involvement in financing the controversial Carmichael coal mine in Australia. On the latter, NBIM states that: “We stressed our expectation that companies should have clear policies and assessment criteria for financing projects”.

On proxy voting, NBIM revealed that it supported fewer sustainability-focused shareholder proposals this year compared to 2019, down to 35.1% from 39.9%. It said that while many of these proposals are “well-founded initiatives that we can support”, others “concern matters of less relevance or seek to micromanage the company”.

But the fund reveals that it did support human rights resolutions at Amazon and Facebook this year, including a new resolution at Facebook calling on the social media giant to assess the risk of exploitation of children on its platforms.

Banks’ lending was another area of focus this year for NBIM, engaging with 16 banks on how they are addressing climate risk in their portfolios.

NBIM, which holds over 9,000 companies across 69 countries, states in the report that it has seen an increase in the number of companies making disclosures around sustainability, but adds that further standardisation is needed to ensure that the information is “relevant and comparable”.

“Sustainability disclosures should be subjected to similar internal governance procedures to financial disclosures, with final sign-off by the board”, it said. As a “starting point”, NBIM recommends that companies look to standards developed by the likes of  Sustainability Accounting Standards Boards and the Global Reporting Initiative.