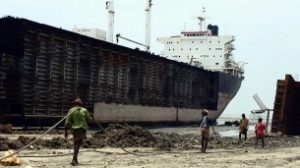 Based on recommendations from the Council on Ethics, Norges Bank, which is responsible for the management of the Norwegian Government Pension Fund Global (GPFG), has decided to divest from Thoresen Thai Agencies PCL, Korea Line Corp, Precious Shipping PCL, and Evergreen Marine Corp Taiwan Ltd. In addition, Pan Ocean Co Ltd. has been placed under formal observation. The Council on Ethics rests its assessment on the fact that the companies have for several years disposed of decommissioned vessels by sending them to be broken up for scrap on the beaches of Bangladesh and Pakistan, a practice known as beaching, where working conditions are extremely poor. The process also causes severe environmental damage. The Council considers that by disposing of ships for scrapping in this way, the companies contribute to serious human rights violations and severe environmental damage.
The Council on Ethics has assessed the Fund’s investment in the companies against s 3a and 3c of the Fund’s ethical guidelines, which state that companies “may be put under observation or be excluded if there is an unacceptable risk that the company contributes to or is responsible for a) serious or systematic human rights violations, […] c) severe environmental damage.”
Large ships have a normal lifespan of around 25 years, after which their residual value lies in the scrap metal. For large ships, this amounts to anywhere between 5,000 and 40,000 tonnes of steel, whose recovery and reuse makes sense from both a financial and resource point of view, provided that it takes place in a safe and sustainable manner. Globally, 1,000 to 1,200 large ships are broken up each year. Almost 80 per cent of the tonnage is broken up on the beaches of Bangladesh, India and Pakistan.The process involves running the vessel onto the beach at high tide. Characteristic for beaching, as practised in Bangladesh and Pakistan, is the absence of the fixed installations or infrastructures that would be found at a quayside facility. Because the beached ships rest in sand and mud, access by cranes or heavy machinery is difficult, much of the work is performed manually. The ships are broken up by cutting out large sections, which fall to the ground in the tidal zone. These sections are then dragged or carried ashore, where they are cut into smaller pieces and sold for scrap.
A further characteristic of the practice is that unskilled labourers carry out tasks that are particularly dangerous and hazardous to health, without training, protective equipment or even basic safety precautions. The accident rate is extremely high, as are the health risks. The use of cutting torches on corrosion-protected steel produces toxic gases to which unprotected workers are constantly exposed. Fires, explosions, falls from heights and crushing injuries are common.
No aggregate information on the number of fatalities is available. In Bangladesh, around 1,000-2,000 accidental deaths have been reported since the 1990s, but these figures are uncertain. At least 30,000 people work directly in the shipbreaking sector in Bangladesh, while around 15,000 are estimated to work directly with shipbreaking in Pakistan. In recent years, there have been several major fires aboard ships being broken up in Pakistan, resulting in many fatalities. How many people’s lives are cut short as a result of accidents or working conditions that are injurious to their health is difficult to estimate, but it is clear that it must be a substantial number. Extensive use of child labour in Bangladesh’s shipbreaking industry has been reported, with children as young as 12 performing dangerous

work that is hazardous to their health. If children under the age of 18 perform such work, it may be considered the worst form of child labour in contravention of ILO Convention 182.
To this must be added the continuous, innumerable and serious violations of several ILO conventions whose purpose it is to establish minimum standards that safeguard the lives and health of workers. The reported conditions demonstrate an almost total failure to comply with the conventions and to implement minimum standards, and this results in the vast number of accidents and considerable harm to human health deriving from these operations. One reason why it is possible to operate this business at a low cost is the deliberate use of minimal resources on measures such as protective equipment, training and safety procedures to create a safe working environment. Wide-ranging and serious violations of these conventions must be deemed to infringe fundamental rights to human life and health, the sum of which must be said to constitute a serious breach of fundamental human rights.
The ships are normally sailed under their own power onto the beach. They will therefore carry everything an operational vessel has on board: several thousand litres of fuel, lubricants and hydraulic oils, tonnes of asbestos and PCB from electrical installations. The hull is protected by tonnes of anti-corrosion paint and anti-fouling coatings that may contain lead, cadmium, organic tin compounds, zinc and chromium. In addition, there are often remnants of the products the ship has carried (chemicals, oil, etc). A report published by the World Bank in 2010 provides an estimate of the total volume of hazardous waste that will be transported toBangladesh and Pakistan in connection with shipbreaking in the next 20 years, given that the current scale of the business is maintained. For Bangladesh, this will amount to an estimated 79,000 tonnes of asbestos and 240,000 tonnes of PCB. For Pakistan, the estimate is for 5,000 tonnes of asbestos and 16,000 tonnes of PCB. Without infrastructure or facilities for the collection of pollutants, many of these substances will spill out into the natural environment, since it is not possible to collect waste and pollution that falls into the mud and is later washed out by the tides. In any case, there is no infrastructure for the collection and treatment of hazardous waste in the areas where the beaching takes place. In addition to this, environmental toxins and hazardous substances are able to disperse in an uncontrolled manner because parts are removed from the ships and sold on for reuse.
Environmental pollution is extensive. Concentrations of heavy metals such as lead, chromium and cadmium in sediments have been found in quantities several hundred-thousand times higher than the national threshold values. PCB concentrations in arable fields near steelworks that process scrap metal have been found to be several thousand times higher than the level defined as polluted. Concentrations of oil in water are a thousand times higher than the national threshold level. Pollution is dispersed with the tides, and has resulted in the loss of marine species and the destruction of fisheries, which previously represented an important source of income in the area. In its assessment of environmental damage, the Council refers, inter alia, to the Basel Convention on the Control of Transboundary Movements of Hazardous Wastes and their Disposal. 186 states, including Bangladesh and Pakistan, have signed this convention. Since the ships to be broken up
by beaching seldom carry the flag of the state where this process takes place, the activity will involve the transboundary movement of hazardous wastes, and will therefore be covered by the convention.
There can scarcely be any doubt that, viewed in isolation, the environmental and working conditions associated with beaching as it is carried out in Bangladesh and Pakistan exceed the threshold for the exclusion of companies from the GPFG. However, these operations are not performed by companies in the GPFG’s portfolio. The first issue to be considered by the Council on Ethics is therefore whether a company may, under these circumstances, be said to contribute to the violation of ethical norms by disposing of a ship for the purpose of beaching it. As the Council on Ethics has a forward-looking mandate, an assessment must then be made of the likelihood that the company will continue to dispose of ships in this manner in the future.
Usually, the company which owns the ship destined to be broken up sells it to a so-called “cash buyer” for scrap. The price that the shipowner receives for the vessel depends on the value of the steel and the cost of dismantling it. Beaching costs the least and therefore provides the highest price for the shipowner – possibly as much as USD 3-7 million more per ship, compared with the price achievable if the ship is broken up using safer and more sustainable methods.
The Council on Ethics presumes that companies that dispose of a ship for scrapping in this manner are fully aware of its fate. It must also be considered as general knowledge in the shipping industry that environmental and working conditions associated with beaching are extremely poor. That a ship is nevertheless sent for
scrapping at beaches of Chittagong in Bangladesh or Gadani in Pakistan is a direct consequence of an active choice on the part of the company that owned the vessel to maximise its profit. In the Council’s opinion, that company must shoulder an independent responsibility for doing so.

There are better ways of dismantling ships that are readily available to the shipowner, but these are more expensive.
Environmental damage occurs as a result of failure to comply with both the Basel Convention and national legislation, in that several thousand tonnes of hazardouswaste are sent annually to countries that have no infrastructure capable of dealing with it in a safe and sustainable manner. It is precisely this kind of transboundary transport of waste that the convention is intended to prevent. Given that it nevertheless does take place, the consequences are predictable: Serious pollution and the dispersal of environmental toxins, which in turn have a negative impact on human health and ecosystems in the area.
The Council on Ethics contacted a number of ship-owning companies in connection with its assessment of this matter. Initially, the Council looked at companies which had disposed of several ships for break-up on the beaches of Bangladesh and Pakistan during the past three years. Following the Council’s approach, several of these companies made it clear that they would no longer dispose of decommissioned ships for the purpose of beaching. The Council on Ethics made no recommendation to exclude these companies. One company replied that it would strive to improve its practice in this area. The Council on Ethics recommended that this company be placed under observation. The Council on Ethics recommended that those ship-owning companies which had given no indication of their intention to make any such change be excluded from investment by the GPFG. Now that these recommendations have been implemented, the Council will re-examine the grounds for exclusion if at the end of four years a company has not sent any additional ships for beaching, or before that time if the company gives notice that it has ceased this practice.