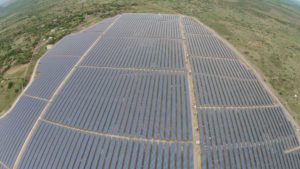 A solar park in Honduras funded by Norwegian mutual insurer and pension fund manager KLP has been successfully constructed, the firm reports as it continues to serve a mandate to fund renewable energy projects around the world.

The Agua Fria solar park, located in the Valle region of Honduras, has a capacity of 60 MW and will produce electricity for 80,000 households. A blog on KLP’s website also states that its construction will reduce CO2 emmissions by 60,000 tonnes per year.

The project was co-funded with Norfund, a development fund established by the Norwegian parliament and owned by the country’s Ministry of Foreign Affairs, and Scatec Solar, an Oslo-based developer and operator of solar power plants.

Electricity produced by the plant will be sold to local electricity company ENEE, thanks to a contract that will maintain its price for 20 years, in a move that KLP says reduces the risk of its investment.

The initiative comes under KLP’s wider remit to make investments that contribute to the sustainable development of society, said Heidi Finskas, vice president for corporate responsibility at KLP. She added: “We have invested in six renewable energy projects as of today, four of which are already in production.”

Of the projects currently completed, two are solar energy parks in South Africa which produce 115 MW of power between them, while one of those under construction isa large-scale solar plant at Lake Turkana in Kenya, which is expected to produce 310 MW.

KLP is currently committed to investing NOK 1bn (€100m) into so-called “impact investments” into solar, wind and water projects by 2017, after doubling an initial target of NOK500m in 2014. Finksas noted that the present value of the firm’s renewable investments stands at just under half of its projected target.

Through investing in projects like the Agua Fria park, KLP’s aims are to contribute to the production of renewable energy, enable a worldwide “green shift” and contribute to the two-degree climate change target set at COP21.

As well as working with Norfund, KPL also invests in improving the financial outlook for poor people in developing countries through the Norwegian Microfinance Initiative (NMI), which invests in local enterprises via equity, loans or guarantees. NMI is also backed by financial services firms Storebrand and DNB, investment company Ferd, the Norwegian Agency for Development Cooperation and Norfund.

In December 2015, KLP announced it had divested from 12 companies due to “coal-based activities”, including AGL Energy and Duke Energy, as well as excluding miner Glencore and defence firm BAE Systems for, respectively, mining in the Western Sahara and involvement in nuclear weapons.