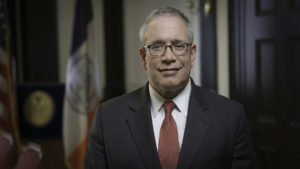 New York City’s pension funds are on the hunt for low-carbon investment managers as part of broader $56bn tender. They will follow in the footsteps of the state-wide New York Common Retirement Fund, which invested $2bn in a new low-carbon index from Goldman Sachs in 2015.

New York City Comptroller Scott Stringer is leading the move to allocate an undisclosed amount of capital into indices “that proactively account for and focus on low-carbon investments and environmental, social and corporate governance factors”.

The New York City Pension Funds, which provide pensions to the city’s police force, fire department and education sector, already have $3.6bn invested in clean energy and energy efficiency. Nearly a quarter of the funds’ infrastructure investments are investment in renewables, and 40% of their real estate is in green ‘certified’ real estate.

Earlier this year, the funds engaged Trucost, now part of S&P Dow Jones Indices, to perform carbon footprinting on their equities portfolios, and Mercer to work on strategies to incorporate carbon considerations into its strategies.

“Incorporating even more sustainable options into our portfolios is a win-win,” said Stringer. “It prepares our funds for the future while encouraging companies to go green. The entire market needs to act on global warming.”

The funds declined to comment on the approximate size of the allocation, or the timeframe within which the tender is expected to take place – although in a statement it said selections would be finalised “in the coming months”. The tender will be part of a wider search for managers to run $56bn of its assets. All managers selected under the process will receive an immediate investment under a three-year contract, or become part of a ‘pool’ of managers that are eligible to compete for future allocations.

It is a similar process undertaken by fellow US climate leader, the California State Teachers Retirement System (CalSTRS), which last year launched a search for up to 10 managers to form a ‘pool’ for future ESG allocations.

Meanwhile Stringer’s proxy access initiative known as the Boardroom Accountability Project has so far prompted more than 400 companies to amend their bylaws and include some sort of proxy access provisions, so that shareholders would be able to nominate their own board candidates.According to Stringer, who leads this wide investor-backed collation, about 50 companies have agreed to negotiate “meaningful” proxy access bylaws in the last six months alone.

Stringer’s initiative was launched in 2014 to tackle the dynamics of what he dubbed as “zombie directors” — those unelected by the majority of shareholders but still serving at boards.

Stringer told RI at the inception of the coalition that BAP is a national movement to empower shareholders in the process of electing board members.

“Friends of friends still get on to boards and make decisions that aren’t in the long-term interest of shareowners,” he said then.

In the absence of a universal proxy rule, BAP’s private ordering proposition has let shareholders who have held 3% of the company’s stock for at least three years to nominate candidates for no more than a one-quarter of the board.

BAP has traditionally targeted companies whose boards need to improve in the areas of diversity, executive payment, and climate change, now including failure to disclose their CO2 emissions.

A milestone of the campaign came in November 2016 when Exxon announced that it would amend its bylaws to adopt proxy access.

But there are still “recalcitrant companies” according to the Comptroller’s Office, among them IBM, Charles Schwab and Netflix, whose AGMs are due shortly.

BAP has been supported by CalPERS and other public employee pension funds from different states such as those of Illinois, Florida, Connecticut, Missouri and North Carolina. BAP’s votes at targeted companies have been backed by international peers such as PGGM, APG and Norges Bank Investment Management.

The full list of companies targeted by the Boardroom Accountability Project is here: