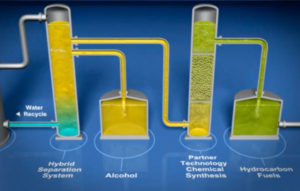 LanzaTech was founded in New Zealand in 2005 and is now headquartered in Chicago. It turns waste gas from steel mills into ethanol and other high value fuels and chemicals and its first commercial plant is now targeted for operation in 2016.
The firm uses patented gas fermentation microbes to transform carbon in industrial wastes and residues. Its microbes grow on gases, rather than sugars, and provide what the firm says is a “novel approach to carbon capture and reuse” – although some observers are sceptical of its process.

It is working with Virgin on what the airline’s boss Richard Branson has called “a major breakthrough in the war on carbon”.

“LanzaTech is one of the most exciting companies New Zealand has produced, with significant global potential,” said Nigel Gormly, NZ Super’s Head of International Direct Investment.He said the fund was “actively diversifying” into alternative and non-conventional energy. The LanzaTech investment will be managed by the Fund’s in-house team.
In March this year, Japanese trading and investment giant Mitsui & Co (with a $20m investment) led a $60m investment round in the company – with new investors such as Siemens’ Venture Capital unit and China International Capital Corporation’s CICC Growth Capital Fund I coming on board alongside Khosla, Qiming Venture Partners, K1W1 and the Malaysian Life Sciences Capital Fund.
LanzaTech says its will be commercially viable option for airlines as it won’t require modifications, and will be produced at a cost comparable to conventional jet fuel.
The LanzaTech investment is one of a series of ‘expansion capital’ investments made by the fund. In October last year NZ Super put an initial US$50m into unlisted fuel cell maker Bloom Energy, the company behind the ‘Bloom Box’ solid oxide fuel cell device. It followed this the next month by putting US$55m into US-based unlisted wind turbine firm Ogin, which specialises in smaller, shrouded turbines.