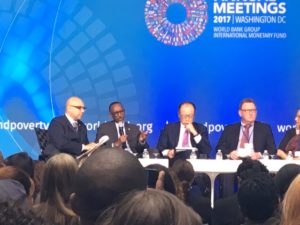 Climate change is the single biggest issue for investors and those that aren’t factoring it and other responsible investment factors into their plans are being negligent of their fiduciary duty, according to the chief executive of the New Zealand Superannuation Fund.

Orr, who is also Chair of the International Forum of Sovereign Wealth Funds (IFSWF) and who has been involved with the Focusing Capital on the Long-term initiative, called for standardisation to fully help to mobilise the “wall of money” looking to allocate to renewable infrastructure projects.

“Fund managers are lazy,” he said, “we like to plug and play, we don’t like to actually be on the ground and do hard work.” There was a need for the World Bank, the IFC and the International Monetary Fund to act as clearinghouses for investment projects. The IFC’s Invest4Climate was a good example.

He would like to see a pipeline of opportunities and to be invited to be part of them.

He went on: “This responsible investment wave is now real and if investors aren’t thinking in that space then they are not doing their fiduciary duty, they’re not investing appropriately, they’re not taking not taking on the risks that they need to take on for the reward that’s there.”Orr spoke of the need for “mutually assured embarrassment”, that’s to say trust in investment partnerships if projects go wrong: “Don’t just say, ‘hey here’s a project’, that just wont work.”

But investing in the climate change challenge was difficult. “Alternative energies are venture capital, they’re not even expansion capital at this point. You need to be able to aggregate these type of opportunities.”
In his speaking notes published by NZ Super, Orr had flagged up responsible investment is a key building block of investment, suggesting it supports long-term returns and amounts to a “licence to operate”.

Meanwhile, Mark Carney, Governor of the Bank of England and Chair of the Financial Stability Board, has once again thrown his weight behind the green bond market, telling an audience the World Bank annual meetings over the weekend that the asset class offers investors an “additional benefit” without an extra cost. “If you have a view that the climate policy framework’s going to tighten over time, [green bonds] actually give you some protection in terms of the underlying credit,” he said. “You are getting that for free right now.” Last year, Carney told another audience that green finance was “a major opportunity” and has also called for more standardisation in the green bond market.