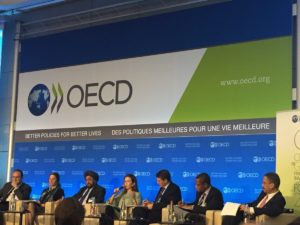 The Development Bank of South Africa (DBSA), the government-owned institute that invests in development infrastructure domestically and across 13 other Southern African countries, will next month re-model itself as a Green Investment Bank, amid signs that a number of national development finance institutions (DFIs) are gearing up for environmental investing and to attract private investor capital.
Speaking at the OECD Forum 2017 for its Centre on Green Finance and Investment in Paris this week, Jonathan First, Head of Syndication Finance at DBSA, said that by the middle of next month, it will have received full permission to become a Green Investment Bank, which he said would be the first such dedicated environmental financing operation in a developing country. According to a 2015 report on the topic by the OECD, there are Green Investment Banks or similar entities at national level in Australia, Japan, Malaysia and Switzerland, as well as others that function as state, county and city level globally. The UK government set up one of the first Green Investment Banks, but recently sold it to Macquarie, which has changed it from a bank into private investment “group”.
First said DBSA would create a product innovation hub via a unit called LAB South Africa in order to create a pipeline of climate mitigation projects. The broader aim of the new Green Investment Bank, he said, was to catalyse private financing into climate products. He said the South African government alongside other Multilateral Development Banks was looking to raise a $160m fund, which it would seek to gear six or seven times. Areas he said the bank would look at for investment, he said, included a clear focus on small-scale energy provision in low income areas. He said that 640 million people across Africa had no access to energy, but that a third could afford off-grid energy if it was available.He said the five big commercial South African banks had all set up units looking at climate mitigation projects, in what he said was now an ‘enabling environment’ for climate finance.
On the same panel, Maria Paz Uribe Estrada, Head International Banking at Findeter, the Colombian Financial Institute for Development, said it had also been working with MDBs on a $2.7bn fund, which was adopting a strategy akin to a green bank and investing in areas like energy efficient street lighting. Maria said: “We are directing a lot of our strategies towards becoming a green bank with the support of the Coalition for Green Capital.”
The Coalition for Green Capital (CGC) is a New York-based non-profit that has helped create successful Green Banks in New York, Connecticut, Rhode Island, Montgomery County MD, and California. CGC also works internationally on the Green Bank concept.
Many of the national development finance institutions said they had been inspired by the success of Green Investment Bank models, notably the example of the $72m Connecticut Green Bank. Bert Hunter, Executive Vice President and Chief Investment Officer at the Connecticut Green Bank, explained how a profitable book of loans to homeowners for solar PV installation that it initiated and took to profitability had been subsequently scaled by Mosaic, a crowd-funded renewables company, which has issued $1bn in solar loans, tranches of which have been sold to investment banks, including $300m worth to Goldman Sachs. In an interview with RI last month, Leslie Maasdorp, CIO of the New Development Bank (also known as BRICS Bank), said it would also focus on becoming a Green Investment Bank.