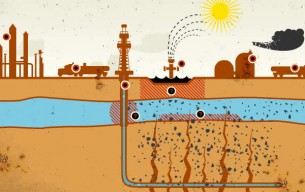 US oil and gas giants including Exxon-Mobil, Chevron and Chesapeake Energy will be pressed by SRI investors backed by the $150bn New York State Common Retirement Fund to report on the financial risks of gas extraction via hydraulic fracturing (fracking) at their 2012 annual general meetings (AGMs). Fracking has become an increasingly polarised issue in the US as the drive for cheaper energy hits environmental concerns. In December last year, the Environmental Protection Agency (EPA) concluded that the pollution of ground water in Wyoming was probably connected to fracking, wiping millions off the share prices of some gas companies, notably Encana, the Canadian company that owns the gas field. Moratoria on fracking have been enacted in New York State, the Delaware River basin and by local governments in several other states.
The latest shareholder resolutions filed by the Investor Environmental Health Network, a coalition of SRI fund managers, investment foundations and faith groups, with support from Ceres, the environmental investor group, demanding that the companies produce detailed financial accounts on the risks of community concerns, regulatory changes and drilling moratoriums. The other targeted companies are EOG Resources, Penn Virginia, Anadarko Petroleum, Range Resources, Noble Energy, Ultra Petroleum and Stone Energy. Tom DiNapoli, Comptroller of the State of New York and sole Trustee ofthe State Common Retirement Fund, backed the investor calls: “Shareholder resolutions that promote transparency and disclosure are potent weapons to ensure that companies are operating safely and in the long-term interest of investors. Oil and gas companies that are held by the Common Retirement Fund must operate in a manner that promotes long-term sustainability, especially when dealing with natural gas, a critical part of our nation’s energy supply.” Larisa Ruoff, Director of Shareholder Advocacy at Green Century Capital Management, said: “As community opposition and regulatory risks for fracking operations grow, investors are likewise concerned about how businesses are managing their exposure to these risks.”
The fracking resolutions are part of a broader campaign by SRI investors on the oil and gas sector with other resolutions focusing on greenhouse gas emissions and worker safety.
Separately, Ceres has released a report looking at the success of similar resolutions filed by investors.
It says that over the past three years, 230 sustainability-focused resolutions were filed by investors in Ceres’ network and that nearly half (110) were withdrawn after the companies agreed to address the issues of concern. Link
Ceres has also updated a list of forthcoming resolutions for the 2012 proxy season: Link