Responsible Investor
Home News & Analysis Governance Only with collaboration and engagement will we even begin to address the...
Return to search
Hot Topics 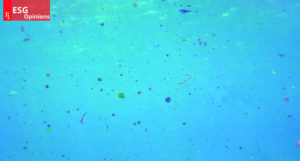 We have all heard of the enormous and growing problem of plastic pollution in our oceans – more than 10 million tonnes of plastic are believed to enter the sea each year. Less well known is that up to a quarter of that total is made up of microplastics – tiny particles of plastic that have a significant and long-lasting consequences for the health of the world’s land and sea ecosystems – and on human health.

Almost 8,000 million tonnes of plastic have been produced since the 1950s, of which only 9% has been recycled. The vast majority – 79% – of discarded plastic sits in landfills or the broader land and marine environment. Plastic is designed to be durable, so it persists for years after it is no longer needed. Much of this contamination ends up in the sea. Since microplastics are a persistent pollutant, without action these concentrations will continue to build up over time.

A report published last month by the First Sentier MUFG Sustainable Investment Institute on microplastic pollution noted that because of their size and ubiquity “there are currently no cost-efficient mechanisms to collect microplastics from the environment at scale once they have been introduced to it. Therefore, the most efficient way to mitigate microplastic pollution is to prevent microplastics from entering the environment in the first place and by targeting actions to reduce emissions at the source.”

The UK’s Marine Conservation Society agrees, advocating that plastic should be prevented from entering the oceans in the first place.

The most promising solutions to this critical and growing issue, therefore, are focused on prevention.

Where does microplastic pollution come from?

Sources of primary microplastic pollution – typically defined as particles smaller than 0.5 mm in any dimension when they enter the environment – include erosion from vehicle tyres, shedding from synthetic textiles, and from their inclusion in some personal care products. Added to this waste are secondary microplastics, which start life in larger form but break down into micro-sized fragments later.

The largest proportion – 35% – of primary microplastic marine pollution comes from synthetic fabrics, which release microfibres – a type of microplastic – when washed. One item of machine-laundered clothing can produce more than 1,900 fibres in a single wash, and it is estimated that some 9 trillion fibres are released in a single week in the UK alone. The use of synthetics is expected to grow further as they are increasingly used in clothing and other textiles. Since this is already a major source of microplastic pollution, preventing further emissions will result in a sizeable reduction of microfibers flowing into oceans.

Devices are already available to do just that. Some consumer products exist that can be used during laundry cycles to decrease the number of fibres shedded. However, research by ScienceDirect indicates that the most effective solution is a built-in washing machine filter that captures microfibers within the washing machine, which therefore stops them entering waterways. The study found that the most successful device  reduced microfibre emissions by 78%. Manufacturers can fit these directly to industrial and domestic washing machines at the point of production. Widespread adoption of these kinds of filters could have a significant impact on the amount of microplastics entering the sea.

Indications are there would be broad consumer support for such a move. A YouGov survey commissioned by the Marine Conservation Society found that 81% of respondents supported government legislation requiring all domestic washing machines to be fitted with microfibre filters. The analysis also found that 56% of consumers would pay an additional £5 for a machine that included the filters, and more than a quarter would pay £50 extra. Estimates put the actual increase in cost to consumers at around £30.

What are investors doing to help prevent microplastics pollution?

First Sentier Investors, along with many of our fellow investment managers, believe that institutional investor collaboration is critical in helping to effect change with the scale and speed required.

We have established, with the support of scientists at the Marine Conservation Society, an institutional investor engagement group to encourage domestic and commercial washing machine manufacturers to add filter technology as standard to all new washing machines produced by the end of 2023. Thirty investors from around the world are involved in the initiative, and are already engaging directly with manufacturers and their trade associations to progress this objective. Initial discussions indicate that some manufacturers are willing to take leadership on providing a solution to this plastic pollution problem by adding microfibre filters to new machines, while some will require guidance from regulators before acting.

This illustrates the important role of policy makers in devising regulations to drive change. France has already introduced a new article to its Environmental Code that, from 2025, will require new washing machines to have built-in filter mechanisms before they can be sold. We are seeking to influence other policy makers to implement similar legislation by highlighting their concerns around the microplastics issue.

We believe these actions provide a practical solution for addressing an unseen but major source of microplastic pollution and we would be delighted to hear from other investors who are as equally concerned.

All data derived from the FSI MUFG Sustainable Investment Institute’s report “Microplastic Pollution: Causes, Consequences, and Issues for Investors”, published in May 2021.