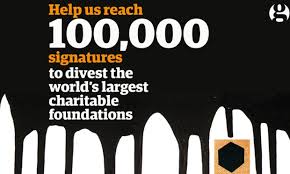 The Guardian’s ‘Keep it in the Ground’ campaign is an extraordinary piece of media campaigning in many ways, not least the way in which it has revealed via the podcasts the open learning journey of those at the paper.
The discussions between The Guardian’s sole owner, Guardian Media Group (GMG), and Editor-in-Chief Alan Rusbridger is the debate that defines the future of financial campaigning in the climate arena as GMG chair Neil Berkett dances between admitting that values have influenced their decision to divest, while also concluding it made sound financial sense. But what he failed to acknowledge was that it was the values discussion that prompted the financial analysis, a cycle of debate now being repeated across the world.
While we can only imagine what the equivalent strategy debate looked like this year at BP, Shell, Exxon and Chevron, the big fossil-fuel companies and their investors are certainly scared of the divestment campaign as it is at least a venture into their territory, even if it is an incomplete, slightly naïve one from a pure investment perspective. How sustainable the campaign will be is anyone’s guess, but the desire to try something in the face of likely failure is stirring and it might be months or years before the real benefit is felt. The clues are everywhere and they are oh so close, but until they play the liberal forces they are targeting at their own game and not that of ethical activists, then full success will elude them.
The targeting strategy is spot on – look at those liberal minded investors that have a clear conflict of interest, such as health foundations. Once they change then this will fuel change elsewhere. However, this denies the US experience so far, where the divesting universities took their battle cries to some of the big Californian, and thus in theory receptive, pension funds. CalPERS and others quickly rejected the divestment hypothesis out of hand.
However, let us be clear that the divestment movement has been critical to forcing the ultimate asset owners such as pension funds, insurance companies, sovereign wealth funds and endowments worldwide into considering the financial implications of taking an ethical stance. This has opened up basic risk analysis that should have been core business for the asset owners. While GMG decided that the return sacrifice was negligible, they went with the Guardian campaign pressures in the end and agreed to divestment of one small part of their carbon exposure. We don’t know if they looked at the carbon risk of utilities, transport, miners, agriculture, heavy manufacturing or others but this was an opportunity missed.We don’t yet have a catchy name like ‘divestment’ for taking a professional, diversified approach to managing climate risk in a portfolio but the Guardian should overlook this branding inconvenience and move its journey further down this line. As long-term investors needing to maintain the Guardian newspaper in ‘perpetuity’, GMG would know that fossil fuel business-as-usual simply isn’t realistic and so the question was surely posed as to whether their fund managers could pick the market timing and bail them out by miraculously anticipating the inevitable carbon crash – clearly they concluded not.

GMG should now do a second about-turn, abandon the simplistic divestment approach and methodically consider the various pathways to the low-carbon economy, including pro-active policy, innovation, sector leadership, panic reaction or re-investment by a few ultra-large funds. Once done, they should use judgement and guesswork to create a base case for carbon and then engage, divest and hedge in optimal harmony, singing their multi-sector reduced carbon exposure from the rooftops.
Elsewhere, their asset owning peers haven’t actually done their job properly and they know it – once they are driven to do what they should as investment professionals, the reality is that even a minor re-alignment of portfolio carbon would shift hundreds of billions of dollars from high to low carbon.

While the tricky business of divestment or underweighting is attempted, a whole host of high-carbon companies remain ready to engage with properly, starting with Chevron in May. It is only time before strong engagement becomes an equal partner to full or partial divestment. If it can’t be made to work, then surely we must revaluate but it must first be attempted.
The Guardian and 350.org have communicated the black and white attraction of divestment superbly, but with an increasing number of people hooked on the subject, they need somewhere for their new audience to develop into – a less catchy, less sexy but do-able and achievable campaign to shift capital in all portfolios in all ways. Having dragged their audience to climate school, it would be a fatal mistake to keep them in first grade for too long.

Julian Poulter is chief executive of the London-based Asset Owners Disclosure Project (AODP). The AODP’s third annual index of the top 500 global asset owners (the Global 500) is out now.