Responsible Investor
Home News & Analysis Governance The $270m Purdue settlement is just the beginning of the pain for...
Return to search
Governance 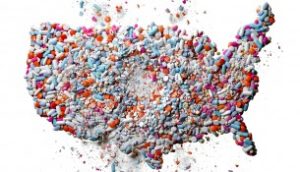 The $270m Purdue Pharma (Purdue) settlement in Oklahoma has alerted investors to the potential costs of the opioid epidemic sweeping America. Some suggest that this is “just one more settlement.” Another in a long line of drug company pay-outs that are hardly noticed on their bottom lines. Besides, Purdue, the owners of OxyContin, the drug at the centre of the crisis, is a private company and therefore of less concern to investors generally.
That would be wrong. This is something different.
The number of lawsuits is multiplying. And the targets of those actions have broadened out beyond Purdue across a large swathe of the quoted pharmaceutical industry. The way the industry conducts itself globally just may be about to change. The extent of the opioid crisis is hard to exaggerate. Millions of people are thought to be struggling with addiction and 200,000 have already died. The rise in the level of US overdoses almost exactly correlates to the rise in OxyContin sales and currently stands at over 40,000 people every year. Drug overdose has become the number one cause of death for Americans under fifty.
No wonder Oklahoma Attorney General, Mike Hunter asserts “the addiction crisis….is a clear and present danger.”
At the end of March he agreed to drop litigation against Purdue, alleging they had “falsely downplay(ed) the risk of opioid addiction,” but only if they settled. This is the first big opioid settlement, and it is causing waves.
For investors in the pharmaceutical industry this is just one of 2,000 lawsuits underway. Politicians from the President – indeed the leaders of both US politicalparties – down to State Attorney Generals are now leading the assault. The list of suits is long and growing. States or counties in California, New York, Texas, Florida, Illinois, Mississippi, Ohio, West Virginia, Kentucky, Nevada, North Carolina, North Dakota, Tennessee, have so far filed legal proceedings. Even the Native American Cherokee Nation has filed. Clearly, litigation will soon be a nationwide phenomenon. Crucially, these suits are not confined to Purdue. The plaintiffs net has widened decisively. The New York case is particularly interesting. Originally aimed just at Purdue, it now includes Johnson & Johnson, Mallinckrodt, Endo Pharmaceuticals, Teva Pharmaceutical Industries, Allergan, and many of their affiliated companies. It also targets distributors.
This is new. New York argues distributors are legally bound to monitor sales to each vendor, and supposedly alert regulators if the amounts seem excessive. The New York suit alleges that three major pharmaceutical distributors – Cardinal Health, McKesson, and AmerisourceBergen (all S&P 500 companies) – helped pharmacies manipulate the timing and volume of orders to circumvent the limits, warning them of “surprise” audits. The suit further alleges that Cardinal Health fired whistle-blowers and appointed compliance officers with zero experience and no training. Cardinal distributed 780 million opioid pills in New York alone.
Attorney Generals are also getting more aggressive in pursuing all internal documents and then filing to make them public. This is further whipping up the political pressure as ever more horrific revelations come out. Whilst publicly lamenting the crisis, Richard Sackler,

former Chairman and President of Purdue, was found to have written in one email: “We have to hammer on the abusers in every way possible. They are the culprits and the problem. They are reckless criminals.” Hmmm.
At the very least this firestorm of litigation could be something similar to the tobacco litigation of the 1990’s, which has seen cigarette makers pay out some $100bn over the last 20 years. But with politicians now so actively involved there are demands for not just cash settlements but also big changes in pharmaceutical industry practices. Three areas are of particular focus: the use of lobbying, advertising (direct to consumers or targeted at physicians), and the interplay between drug companies and regulators.
On the regulator point, drug companies of course fund their own clinical trials, having a vested financial interest in the outcomes. Previous issues with drugs have raised concerns. For example it emerged that the blood thinner Pradaxa was fast tracked to approval on the basis of a clinical sample that excluded the older patients actually most likely to take the drug. The FDA approved the drug after only six months of review. Critics argue that maybe the requirement for the FDA to rule on any approval within ten months should be removed.
The dubious influence of political lobbying has been badly exposed by the opioid crisis. The Pain Care Forum, funded by Big Pharma, spent $740m pushing back on legislators’ attempts to limit opioid prescriptions. Senator Elizabeth Warren, one of the leading Democrats, has focussed everyone’s minds on whether lobbying buys influence in Congress. Critics argue that those on approval boards and advisory committees should not be on Big Pharma’s payroll, either directly or indirectly.
Finally, attention is turning to drug advertising. Since direct advertising to the consumer was made possible through de-regulation under President Reagan, it has become enormous.Indeed, it is such a big chunk of media revenue it is even argued that it makes the media nervous about raising disruptive issues.

Reporting is shelved by editors if it threatens advertising revenue. Was this a factor in the opioid crisis?
Herzberg and Greene documented in 2010 the rich history of pharmaceutical companies convincing physicians that opioids were not addictive. Herzberg argues that OxyContin was not a new wonder drug at all. It was simply oxycodone, developed in 1917, in a time-release formulation. What changed was not the science, but the ever-increasing ability of doctors to fall for what pharma companies tell them; especially when they themselves are richly rewarded.
I met with a “Pain Clinic buster.” More prosaically that means a Florida state official who goes around closing the numerous pain clinics that have sprung up, where doctors are making a killing. Literally.
He spoke about one clinic where he found addicts crowded into cars who had driven all the way from Alabama to get pills. The doctor who ran the clinic had two Porsches. The number plates were “Pain 1”, and “Pain 2.”
The OxyContin advertising targeted doctors. It convinced them that this new wonder drug was safe to prescribe with no side effects and no addiction.
The strap-line was “I got my life back.” In the time it has taken you to read this article someone has died of an opioid overdose.

Christopher Walker is a writer on business and politics. He was a pharmaceutical analyst in the investment industry.